Baoli Ma named for building a truly inclusive and forward-looking culture within BlueCity, and leading the company to its historic NASDAQ listing in 2020

BEIJING, Jan. 19, 2021 (GLOBE NEWSWIRE) -- Baoli Ma, founder, chairman and chief executive officer of BlueCity, a world-leading LGBTQ community platform providing a full suite of services to foster connections and enhance the well-being of the LGBTQ community, has become the first person from the Chinese mainland recognized on the âOUTstanding 100 LGBT+ Executives Listâ from INvolve, a global network and consultancy championing diversity and inclusion in business.

It also focused on the companyâs historical move as the worldâs LBGT+-focused social network to list on Nasdaq in July 2020, which Ma sees as not only a milestone for BlueCity, but also for the global LGBT+ community his company proudly represents.

âIâm delighted to be named among the Role Model Lists, which underline the amazing achievements of LGBT+ people in global business,â said Ma. âI believe that our vibrant, welcoming workplace allows more than half of our 700-strong team to be their true authentic selves, which ultimately creates a more innovative, creative company.â

First launched in 2013 and supported by Yahoo! Finance, INvolveâs OUTstanding Role Model Lists âshowcase and celebrate the global business leaders who are driving change in the workplace and inspiring the next generation of diverse talent.â

43-year-old Ma was formerly a closeted policeman known online only by the alias âGeng Le,â who founded one of Chinaâs first and most influential LGBTQ online forums, Danlan, the predecessor of BlueCity back in 2000.

After coming out in 2011, he resigned from the police force and wholly dedicated himself to raising awareness for the LGBTQ community, founding BlueCity in the same year along with the launch of mobile app Blued in 2012. Blued now connects about 58 million people worldwide with nearly half of them outside China.

Maâs personal mission is to promote social equality for and the wellbeing of the global LGBTQ community, with his work winning him several accolades over the years. Business Insider named him among 2020âs 100 People Transforming Business in Asia and named as a âGlobal Thinkerâ by the U.S. magazine Foreign Policy in 2017. Â

BlueCity (NASDAQ: BLCT) is a world-leading online LGBTQ platform providing a full suite of services that foster connections and enhance the wellbeing of the LGBTQ community through its portfolio of brands. BlueCityâs mobile appÂ BluedÂ enables users to conveniently and safely connect with each other, express themselves and access professional health-related and family planning consulting services. Available in 13 languages, it has more than 58 million registered users worldwide and is the largest online LGBTQ community in China, India, South Korea, Thailand and Vietnam. BlueCityâs portfolio of brands also includes Finka, a leading gay social networking app for a younger generation in China, and LESDO, a leading lesbian social networking app in China.

A photo accompanying this announcement is available at https://www.globenewswire.com/NewsRoom/AttachmentNg/c3d6a64e-7aa3-44d0-9777-7bf484521f58Â 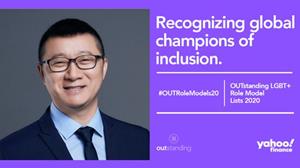