VANCOUVER, British Columbia, Oct. 28, 2021 (GLOBE NEWSWIRE) -- Aton Resources Inc. (AAN: TSX-V) (âAtonâ or the âCompany") is pleased to update investors on the re-commencement of field activities at the Companyâs 100% owned Abu Marawat Concession (âAbu Marawatâ or the âConcessionâ), in the Eastern Desert of Egypt, see Figure 1.

âWe are delighted to finally be back in the field at Abu Marawat after a pretty tough year and a half, with covid having made it very difficult for us in Egypt. Our drilling rig has now finally arrived in port in Egypt, after again suffering long covid-related export and shipping delays from Indonesia, and we now expect to be back drilling up on the hill at Rodruin within the next couple of weeks, after the rig has cleared customs and mobilised to site. After re-opening the camp at Hamama in June, and while we have been waiting for the rig, we have been busy however. As well as building and relocating to the new camp at Rodruin, which will be our new main exploration base going forwards, we have also been working at the Abu Gaharish prospect, which is our highest ranked exploration prospect, after Rodruin. And we are today very happy to be able to report more excellent sampling results from Abu Gaharish, again demonstrating its prospectivity,â said Tonno Vahk, Interim CEO. âThese results again show the great potential of the Abu Gaharish prospect, with the many high grade gold assays mostly coming from new mineralised zones, structures, and veins that we had not previously identified. These new results, covering at least a 3 km strike length along the margin of the Gaharish granite, further confirm our belief in the presence of a very significant gold mineralised structural zone at Abu Gaharish. We believe that the Abu Gaharish mineralisation bears many similarities to that at the world-class Sukari deposit 200 km to the south. The results again indicate the prospectivity of our entire Abu Marawat Concession, and our intention is very much to finally drill test some of our regional exploration targets within the coming 12-18 months, starting with Abu Gaharish, as well as aggressively bringing the advanced exploration project at Rodruin forwards to a maiden mineral resource.â

The company re-opened the exploration camp at Hamama in June 2021, and has since then constructed a new camp and core processing facility at Rodruin (Figure 1). The exploration team re-located to the new Rodruin camp in mid-October 2021, and this will serve as the new main base for Atonâs field activities going forwards, due to its closer proximity to the high priority Abu Gaharish, Sir Bakis, Semna, Bohlog and Zeno regional exploration prospects, amongst others, as well as the advanced Rodruin exploration project. The Hamama camp has been placed on temporary care and maintenance and will be rapidly re-opened when further drilling is undertaken at Hamama and West Garida in 2022.

Since the re-commencement of field activities Aton has been operating 2 excavators at Hamama and Rodruin to prepare for the upcoming drill programmes at both these sites. The 2 excavators are currently both operating at Rodruin, in advance of the diamond drilling programme which is now expected to start in mid-November 2021, following the arrival of Energoldâs drill rig into port in Egypt on October 22, 2021 (see news release dated June 14, 2021). Some ancillary materials and equipment have already been delivered to the Rodruin site in advance of the start of diamond drilling.

Additional channel sampling of newly exposed mineralisation in road cuttings at Rodruin has been undertaken, continuing on from the 2018 programme, and the first results from this sampling are expected soon.

Further sampling and mapping has also been carried out at the Abu Gaharish prospect, including surface and underground grab and channel sampling (see below), as well as a programme of wadi sediment sampling, with the samples being submitted for ultra-low level multi-element ionic leach (mobile metal ion) geochemical analysis. Results of the wadi sediment sampling programme are also expected soon.

A programme of surface sampling was undertaken between June and September 2021 at the Abu Gaharish area, which was partly guided by recent excavation of mineralised veins and structures by artisanal miners, covering a c. 3 km strike length on the southeastern margin of the Gaharish granite pluton (Figure 2). See news releases dated December 19, 2017 and April 23, 2018 for details of previous sampling programmes undertaken by the Company at Abu Gaharish. Most of the samples were collected from previously unidentified veins and structures.

A total of 73 samples were collected, mostly from surface, with some also from shallow underground workings that had been recently excavated by the artisanal miners. Of these 73 samples, 56 were selective grab and grab composite samples, and 17 were channel samples. A further 10 QAQC samples were submitted for analysis, comprising 4 duplicate samples, 4 blank samples, 1 flushing sample, and 1 standard sample of a certified reference material.

The results from the grab and grab samples were particularly encouraging, indicating the presence of high grade mineralised structures over a wide area, and are summarised in Table 1 below. Assay details of all the samples are provided in Appendix A.

Table 1: Summary of the grab and grab composite sampling results

Mapping of the mineralised structures indicated a series of preferred mineralised orientations, which broadly confirmed Atonâs previous interpretation that mineralisation in the Abu Gaharish area is controlled by a series of conjugate structures within an overall structural zone that strikes approximately north-northeast and parallel to the contact between the country rocks and the Gaharish pluton. The country rocks in the general area consist of a series of metavolcanic and metasedimentary rocks, and ophiolitic serpentinites.

Atonâs geologists continue to interpret the mineralisation at Abu Gaharish as being related to a significant structural and gold mineralised zone localised by the contact between the late Gaharish granite pluton and the package of country rocks. The mineralisation appears to be hosted in a complex series of conjugate and ladder-type structures, and as these new results demonstrate some of these structures carry very significant gold grades.

All samples were collected onsite and bagged up in cloth bags, and dried and crushed to -4mm at Atonâs onsite Hamama sample preparation laboratory, and split to a nominal c. 250-500g sample size.

The dried, crushed and split samples were shipped to ALS Minerals sample preparation facility at Marsa Alam, Egypt where they were pulverised to a size fraction of better than 85% passing 75 microns. From this pulverised material a further sub-sample was split off with a nominal c. 50g size, which was shipped on to ALS Minerals at Loughrea, Ireland for analysis.

Aton Resources Inc. (AAN: TSX-V) is focused on its 100% owned Abu Marawat Concession (âAbu Marawatâ), located in Egyptâs Arabian-Nubian Shield, approximately 200 km north of Centaminâs world-class Sukari gold mine. Aton has identified numerous gold and base metal exploration targets at Abu Marawat, including the Hamama deposit in the west, the Abu Marawat deposit in the northeast, and the advanced Rodruin exploration prospect in the south of the Concession. Two historic British gold mines are also located on the Concession at Sir Bakis and Semna. Aton has identified several distinct geological trends within Abu Marawat, which display potential for the development of a variety of styles of precious and base metal mineralisation. Abu Marawat is 447.7 km2 in size and is located in an area of excellent infrastructure; a four-lane highway, a 220kV power line, and a water pipeline are in close proximity, as are the international airports at Hurghada and Luxor.

Note Regarding Forward-Looking Statements Some of the statements contained in this release are forward-looking statements. Since forward-looking statements address future events and conditions; by their very nature they involve inherent risks and uncertainties. Actual results in each case could differ materially from those currently anticipated in such statements. Neither TSX Venture Exchange nor its Regulation Services Provider (as that term is defined in policies of the TSX Venture Exchange) accepts responsibility for the adequacy or accuracy of this release. 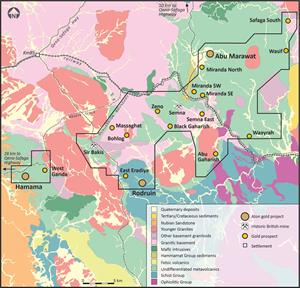 Geological map of the Abu Marawat Concession, showing the location of the Abu Gaharish prospect
Figure 2 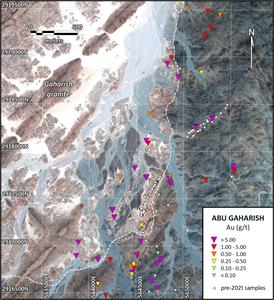