WASHINGTON, D.C., July 17, 2021 (GLOBE NEWSWIRE) -- The International Religious Freedom (IRF) Summit 2021, the largest and most important religious freedom event of the year, took place in the Omni Shoreham Hotel in Washington D.C. on July 13â15, with over 1,000 people in attendance. As a Summit partner, the Action Alliance to Redress 1219 hosted its second workshop titled âA Question of Justice: The Tai Ji Men Caseâ on July 15, with over 4,300 advocates for religious liberty participating in the event either in person or online.

As the workshop started, former U.S. Ambassador-at-large for International Religious Freedom Sam Brownback, co-chair of the IRF Summit 2021, greeted the audience and thanked Bitter Winter, an online magazine, for being a co-sponsor for the Summit. Ambassador Brownback praised Prof. Massimo Introvigne, editor-in-chief of Bitter Winter, for being a great investigator, who wrote about what happened to Tai Ji Men in Taiwan. Ambassador Brownback stated that freedom of religion is a fundamental human right, without which humanity cannot flourish. He emphasized that this right should be safeguarded for everyone, everywhere, all the time. This sentiment also aligns with this Summitâs Charter of Religious Freedom, which highlights the âfreedom of religion and conscience.â While different religious groups may practice their values in various ways, âwe believe governmentsâ role is to protect that innate right of a person to select their own course of future for their soul,â stated Ambassador Brownback.

During the Summit, Dr. Katrina Lantos Swett, president of the Lantos Foundation for Human Rights and Justice and co-chair of the IRF Summit 2021, emphasized the importance of conscience, saying that if people can always keep themselves attuned to hear their conscience, it will whisper to them the difference between right and wrong despite the temptations and ugliness in the world. The concept of conscience mentioned by Dr. Swett is very relevant to the Tai Ji Men case.

Pamela Chen, on behalf of tens of thousands of Tai Ji Men dizi (disciples), pointed out that their religious freedom has been violated in Taiwan for 24 years. She lamented that "Taiwan's taxation bureau issued unlawful tax bills to Tai Ji Men simply based on a fabricated indictment, without conducting any substantive investigation. That was against conscience. In 2007, Taiwan's Supreme Court found Tai Ji Men not guilty of tax evasion or any other charges, confirming that Tai Ji Men did not owe any tax, but Taiwan's taxation bureau continued to impose unjustified taxes on Tai Ji Men. That was against conscience. The leader of Tai Ji Men did not owe any tax, but his land intended for a spiritual center was confiscated. That was theft of his property and was against conscience. We are Tai Ji Men dizi in the U.S. We are now speaking out to the international community, seeking support to urge the Taiwanese government to correct its mistakes and implement true democracy and human rights.â

âTai Ji Men is a spiritual organization that practices qigong and martial arts, with 15 academies in the United States and Taiwan. It has been dedicated to promoting a culture of love, peace, and conscience. To date, it has traveled to 101 countries, influencing heads of state and leaders of all countries to do the right thing,â added Chen.

Kenneth Jacobsen, professor of law at Temple University, Philadelphia, the U.S. and former advisor to U.S. President Bill Clinton, has studied the Tai Ji Men case for years and written a paper on this case. He shared that he was offended by the major violations of law by the few rogue bureaucrats throughout the Tai Ji Men case. Like Tai Ji Men dizi (disciples), Prof. Jacobsen loves Taiwan and the people of Taiwan, and that is exactly the reason why these officials should be held accountable so that no one else will suffer. Prof. Jacobsen ended by calling upon President Tsai Ing-wen and other leaders of Taiwan to âfix the mistakes of the past. âTo allow errors to continue, to perpetuate mistakes that were made in the past is as bad, if not worse, than committing those mistakes in the first place.â Prof. Jacobsen stated, âWhat I would like to say to the Taiwan government is: 'Do the right thing!'â

Prof. Massimo Introvigne, sociologist, managing director of Center for Studies on New Religions, and co-author of a white paper on the Tai Ji Men case, joined the workshop remotely, emphasizing that Taiwan is a democratic country. âWrong bureaucrats of course exist everywhere, including in my own country of Italy, but the democratic test is whether other powers in a democratic state are able to keep rogue bureaucrats in check.â He said that Tai Ji Men is really a vibrant, flourishing religious culture and that "I believe friends of Taiwan precisely should be in the first row calling for a solution of the Tai Ji Men case.â He emphasized that the Tai Ji Men case âis not a tax case, if it was, it would have been settled long ago. It is a matter of principle and a test for freedom of religion or belief.â

Marco Respinti, director in charge of Bitter Winter, also attended the forum online. He said that Bitter Winter has closely and regularly followed the Tai Ji Men case. The case is a tragedy because it is a story of the prosecution of the innocent at the beginning and then goes on for almost a quarter of a century. Respinti said that it is a journalistâs responsibility to focus on cases like the Tai Ji Men case and confront a prosecutorâs untrue accusations, such as raising goblins. Taiwan stands for democracy, and he urges the Taiwanese government to clear the names of Tai Ji Men Shifu (master) and dizi (disciples) and re-establish justice. Respinti calls for all mediaâs to report typical human rights violation cases like the Tai Ji Men case and to ultimately rectify the case.

About Action Alliance to Redress 1219: Action Alliance to Redress 1219 is a group of international and Taiwanese legal, religious, and human rights specialists working to restore the truth about the ongoing persecution of Tai Ji Men in Taiwan by a small group of bureaucrats that has lasted for 24 years, as well as their misuse of authority and violations of the law. In addition to rectifying the Tai Ji Men case and revealing the truth, it is also committed to defending religious freedom, speaking out for related injustices in Taiwan. The Alliance calls on those in power not to ignore peopleâs fundamental human rights and demands that perpetrators be held accountable to protect democracy, the rule of law, and justice.

A photo accompanying this announcement is available at https://www.globenewswire.com/NewsRoom/AttachmentNg/64aeaf34-80a7-489a-aef0-1553fe693ebc

Tai Ji Menâs Protest in the US 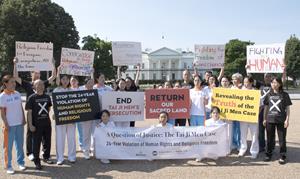 Tai Ji Men members from various cities of the United States protest against the 24-year persecution of Tai Ji Men by a few rogue bureaucrats in Taiwan in front of the White House on July 16, 2021.
Source: Action Alliance to Redress 1219