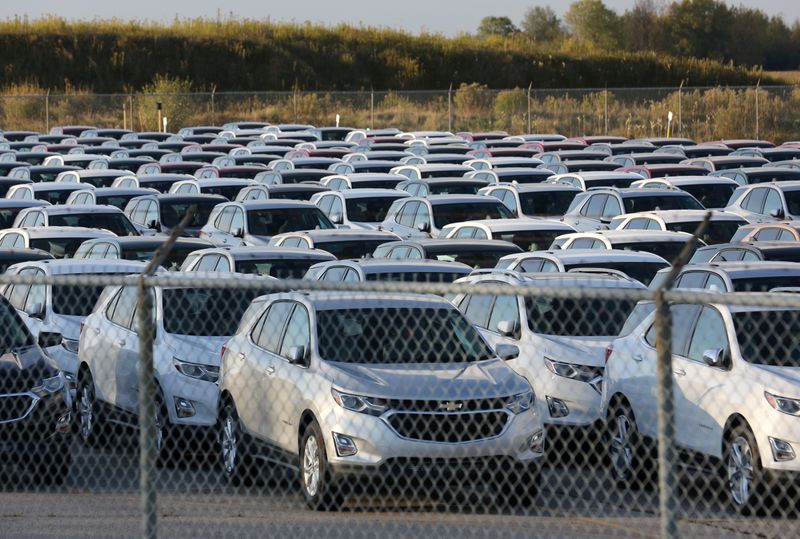 (Reuters) - Automakers on Thursday reported a rebound in first-quarter U.S. sales from a coronavirus-induced slump last year, but volumes were capped by a global chip scarcity that forced many companies to cut production.

The need for increased personal safety during the COVID-19 pandemic has boosted sales for automakers, as people prefer traveling by their own cars to using public transportation.

The semiconductor chip shortage and severe winter weather in south west United States in February have caused automakers to shut factories, turning analysts cautious about the speed of the sector's recovery in 2021.

"March auto sales are shaping up to meet or exceed pre-COVID levels. The big rebound from the prior month was assisted by stimulus and any pent-up demand from weather impacts in February," IHS Markit analyst Chris Hopson said.

"However, the stronger sales results are bumping against ongoing production issues, creating what could be a volatile demand environment over the next few months."

"We are operating our truck and full-size SUV plants at full capacity and we plan to recover lost car and crossover production in the second half of the year," GM Executive Vice President Steve Carlisle said.

The No.1 U.S. automaker said it expects the country's auto demand to remain "strong" through the year, with rising consumer confidence and spending, aided by stimulus payments, higher vaccination rates and the reopening of the economy.

Higher demand and tight supply has allowed automakers to raise prices in the United States, with average price of a new vehicle reaching $37,314 in the first quarter, up nearly $3,000 from a year earlier and over $4,000 higher than 2019, auto consultancies J.D. Power and LMC Automotive said.

GM said it set a first-quarter record with average transaction prices at $40,353. The company estimates that the seasonally adjusted annual sales pace for the first quarter of the year was around 16.7 million units.

Randy Parker, Hyundai executive president of sales, said he sees a lot of pent-up demand in the U.S. market as rental car companies are also anticipating a recovery in travel and "beating down our door for production."

(This story corrects spelling of IHS Markit in paragraph 4)

(Reporting by Ankit Ajmera in Bengaluru and Joe White in Detroit; Editing by Aditya Soni, Shinjini Ganguli and Vinay Dwivedi)