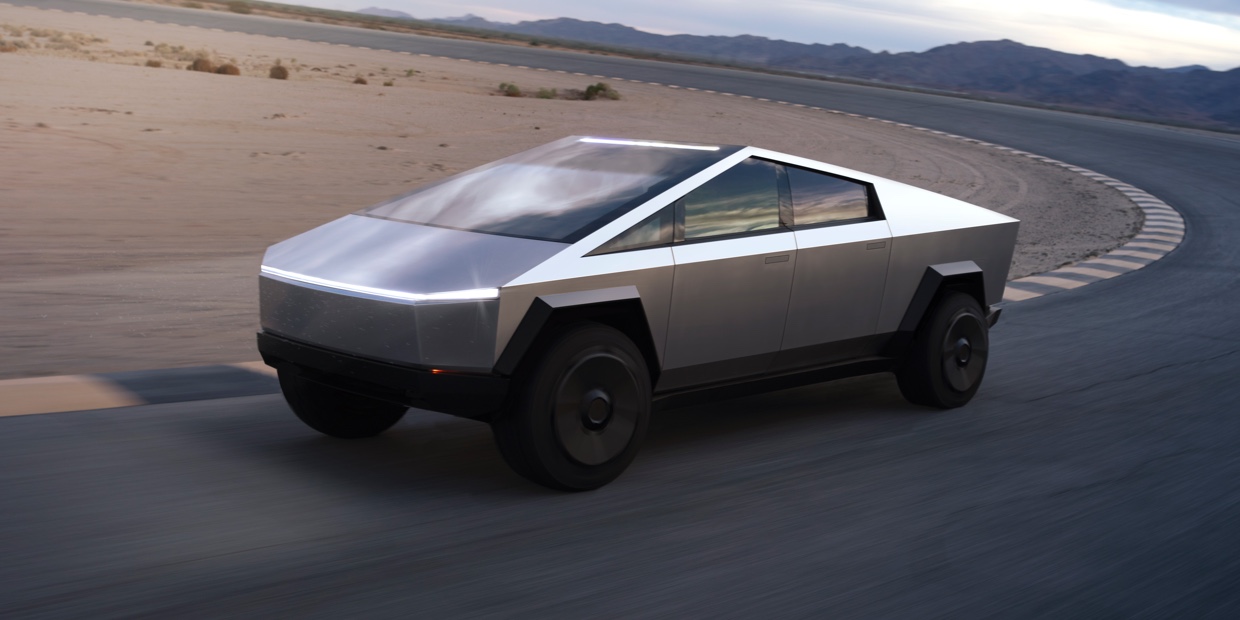 By Naomi Tajitsu and Peter Henderson

(Reuters) - Tesla Inc (NASDAQ: TSLA) on Thursday unveiled its electric pickup, a truck with a futuristic angular body in gunmetal gray that resembled an armored vehicle and takes aim at the heart of Detroit automakers' profits.

Starting from $39,900, the Cybertruck is less expensive than initially flagged but its polarizing design could limit sales in a popular segment symbolic of a rugged, practical American lifestyle.

At a launch event in Los Angeles, Tesla Chief Executive Elon Musk said other versions will be priced at $49,900 and $69,900 with the most expensive offering a range of more than 500 miles (800 km). By comparison, the current maximum range of a Tesla car is 370 miles for its long-range Model S sedan.

Production is expected to begin around late 2021.

Made from ultra-hard stainless steel which Musk claimed was bulletproof, the four-door six-seater truck's sharp geometric body was set atop massive tires. Its tinted windows were made from armored glass, while a single strip of white light wrapped around the truck's front, replacing headlamps.

"Trucks have been the same for a very long time, like 100 years," he said, as an audience of Tesla fans chuckled at a slideshow of pickup truck designs throughout the decades. "We need something different."

Musk's assertion that the Cybertruck's exterior "won't scratch and dent" appeared to be borne out after it was hit with a sledgehammer.

But in a snafu that invited much mockery online, the armored glass windows cracked like spider webs when metal balls were thrown at them. "Room for improvement," Musk said, although he noted the glass had not completely broken.

But analysts said its design meant the Cybertruck was unlikely to become more than a niche product and as such would have little impact on energy sustainability as Musk touted in his presentation.

"It feels like it's a truck for (Musk) and his friends in Silicon valley, not necessarily Joe the plumber who needs the truck to run his plumbing business," said Jessica Caldwell, an analyst at automotive consultancy Edmunds.

The design of the truck, which can accelerate from 0-60 miles an hour in 2.9 seconds, was partly influenced by the Lotus Esprit sportscar that doubled as a submarine in the 1970s James Bond film "The Spy Who Loved Me" as well as by the movie Blade Runner.

"I just watched tesla release the #cybertruck and honestly? My life feels complete," wrote @aidan_tenud, while @nateallensnyde wrote: "Its nice to see Elon Musk make a cardboard box car he drew in kindergarten,".

For a graphic on Tesla's entry into the pickup truck market, please click on: https://tmsnrt.rs/2KK2X6e

FORD, GM GEAR UP TOO

Tesla's focus on the high-performance end of the pickup market is only natural given the success of Ford's 450-horsepower F-150 Raptor truck, which launched in 2009 and whose sales have since risen annually.

Ford has never had to offer incentives on the model, which costs in the high $60,000 range, according to Ford spokesman Mike Levine. Ford also offers the more expensive F-150 Limited, its most powerful and luxurious pickup.

Some analysts said they were concerned Tesla might not be able to deliver on its promised base price for the Cybertruck, given that it will be made from the same stainless steel to be used in the SpaceX Starship rocket and which could make it hard to keep a lid on production costs.

Ford and GM are also gearing up to challenge Tesla more directly with new offerings like the Ford Mustang Mach E electric SUV as well as electric pickups.

Ford aims to sell an electric F-series in late 2021, sources familiar with the plans said. GM plans to build a family of premium electric pickup trucks and SUVs, with the first pickup due to go on sale in the fall of 2021.

In April, Ford invested $500 million in startup Rivian, which plans to build its own electric pickup beginning in fall 2020.

Electric pickups and SUVs could help Ford and GM generate the significant EV sales they will need to meet tougher emission standards and EV mandates in California and other states.

The Trump administration is moving to roll back those standards, but electric trucks are a hedge if California prevails.

Demand for full-size electric pickup trucks in the near term may not be huge, however.

Industry tracking firm IHS Markit estimates the electric truck segment - both full- and mid-sized models - will account for about 75,000 sales in 2026, compared with an expected 3 million light trucks overall. The Tesla truck is not part of that estimate.

(Reporting by Naomi Tajitsu in Tokyo and Peter Henderson in San Francisco; Additional reporting by Miyoung Kim in Singapore, Joseph White and Ben Klayman in Detroit; Editing by Edwina Gibbs)