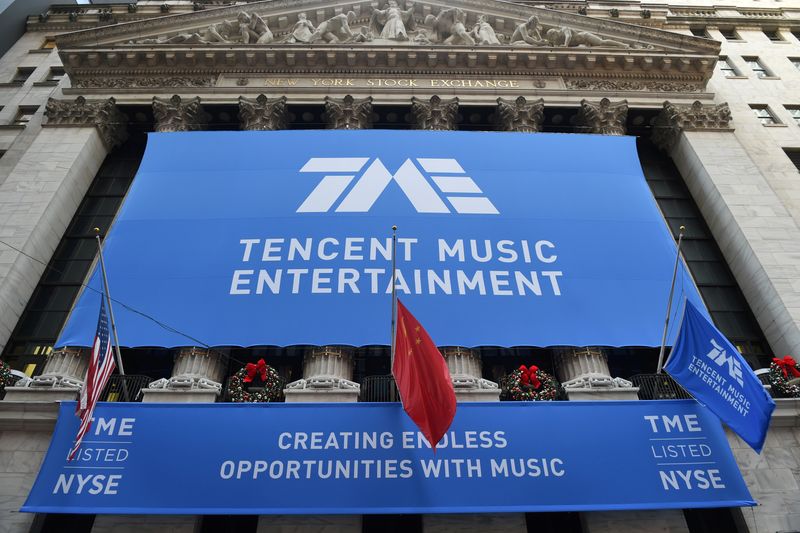 By Akanksha Rana and Pei Li

However, the number of paying users in the segment surged 18.5% to 12.8 million.

Tencent Music, controlled by Chinese tech giant Tencent Holdings <0700.HK>, gets nearly three quarters of its revenue from this business, unlike peers including Spotify (NYSE: SPOT) who make most of their money from music subscriptions.

Growth is picking up in the second quarter even as monthly average user numbers may normalise with people heading back to work and having less leisure time, Chief Strategy Officer Tony Yip said on a post-earnings conference call on Tuesday.

"We strongly believe the worst is behind us, and we do expect the growth rate to recover in Q2," he said.

Analysts expect the company to post an 8.5% rise in second-quarter revenue, according to data from Refinitiv.

Tencent Music, which had warned of soft first-quarter sales in March, said revenue in the period rose about 10% to 6.31 billion yuan ($889 million). Analysts expected 6.33 billion yuan.

The company posted a profit of 0.66 yuan excluding one-time items, ahead of the 0.63 yuan forecast by analysts.

"We have seen some behavioural changes during the lockdown and observed an increasing number of users listening to music with home appliances, especially TVs and smart devices," Chief Executive Cussion Pang said.

Only 10% of its music is behind pay-wall, but Tencent Music said it expects to hike the volume to 20% by the year-end.

Spotify's paid music subscribers surged to 130 million in the first quarter. Spotify is also a stakeholder in Tencent Music.

(Reporting by Akanksha Rana in Bengaluru and Pei Li in Hong Kong; Editing by Shailesh Kuber and Sherry Jacob-Phillips)