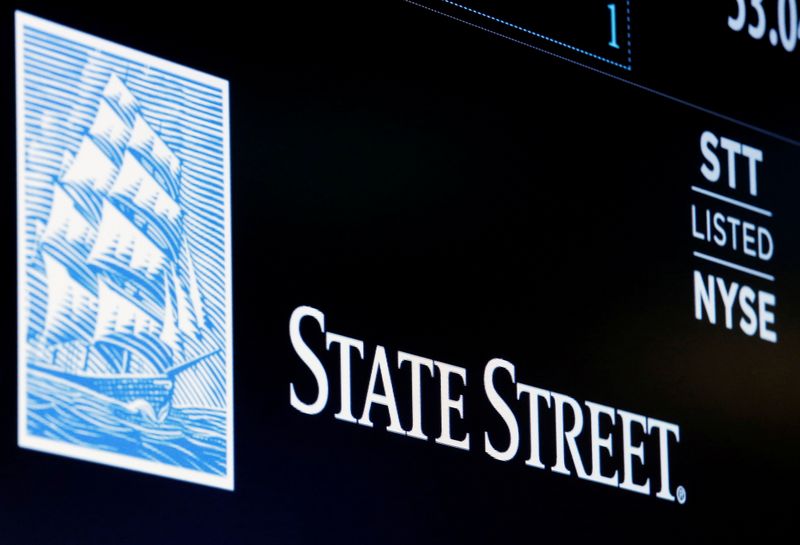 FILE PHOTO: The ticker and logo for State Street Corporation is displayed on a screen at the post where it's traded on the floor of the New York Stock Exchange (NYSE) in New York City, U.S., June 30, 2016. REUTERS/Brendan McDermid/File Photo

(Reuters) -State Street Corp agreed to pay a $115 million criminal penalty and enter a deferred prosecution agreement to resolve charges the bank defrauded customers by secretly overcharging them for back-office expenses, the U.S. Department of Justice said on Thursday.

According to settlement papers, State Street admitted that from 1998 to 2015 its executives defrauded customers out of more than $290 million through hidden markups.

The Boston-based company also admitted that its executives tried to conceal the markups by leaving the details off invoices and "actively" misleading customers who questioned them.

State Street defrauded customers "in a most pedestrian way: They tacked on hidden markups to routine charges for out-of-pocket expenses," Acting U.S. Attorney Nathaniel Mendell said in a statement.

"We regret these overcharges," State Street said in a statement. "We have also invested, and continue to invest, significant resources to improve and strengthen our invoicing processes, controls and governance."

The bank said it previously set aside funds to cover the settlement.

State Street is one of the world's largest custodial banks, which provide services such as accounting, asset valuations, currency trading, portfolio servicing and stock lending.

Thursday's accord followed $94.3 million of related civil settlements in June 2019 with the U.S. Securities and Exchange Commission and Massachusetts Attorney General Maura Healey.

And in July 2016 it agreed to pay $530 million to settle regulatory probes and private lawsuits concerning overcharges on foreign currency transactions.