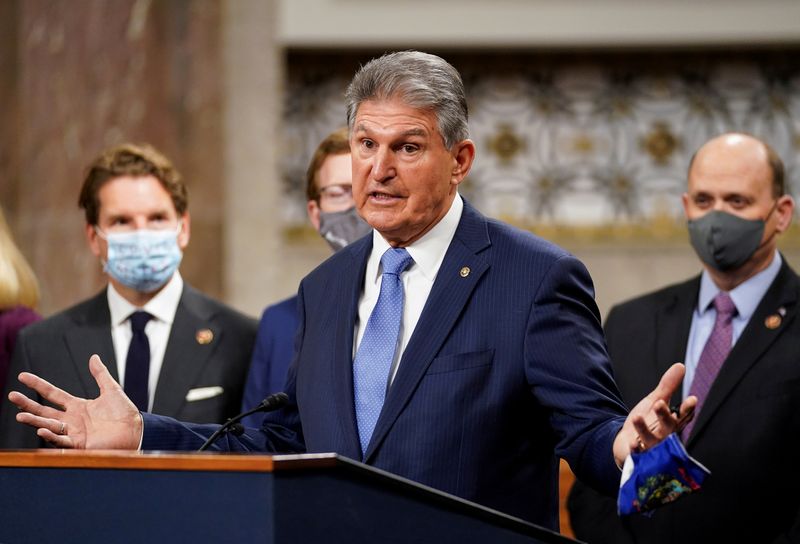 FILE PHOTO: U.S. Senator Joe Manchin (D-WVA) removes his mask to speak as bipartisan members of the Senate and House gather to announce a framework for fresh coronavirus disease (COVID-19) relief legislation at a news conference on Capitol Hill in Washin

WASHINGTON (Reuters) - The head of the U.S. Senate energy committee, Joe Manchin, on Tuesday urged President Joe Biden to reverse his opposition to the Keystone XL pipeline, saying the project provides union jobs and is safer than transporting the oil via trucks and trains.

Biden revoked a permit for the pipeline which would transport 830,000 barrels a day of carbon-intensive heavy crude from Canada's Alberta to Nebraska. It was part of a flurry of Biden's executive orders aimed at curbing climate change.

In a letter to fellow Democrat Biden, the West Virginia senator said that even without the pipeline, the oil would still find its way to the United States by rail and truck, and pointed to U.S. data showing those methods result in more spills than pipelines.

"Pipelines continue to be the safest mode to transport our oil and natural gas resources and they support thousands of high-paying, American union jobs," Manchin said.

Opponents of TC Energy Corp's pipeline project say building such infrastructure would lock in decades of dependence on oil, making it harder to transition to clean energy.

Manchin said he supports "responsible" energy infrastructure development including the Mountain Valley pipeline, which would take natural gas from Manchin's state to Virginia.

That project, led by Equitrans Midstream Corp, is one of several pipelines that have been delayed by regulatory and legal fights with states and environmental groups.

Fourteen attorneys general, led by Austin Knudsen of oil-producing Montana, also urged Biden in a separate letter to reverse his decision on the Keystone permit.

Manchin's support for big pipelines underscores the difficulty that Biden could have moving wide-ranging climate legislation through Congress given Democrats have only the slimmest possible majority in the Senate.