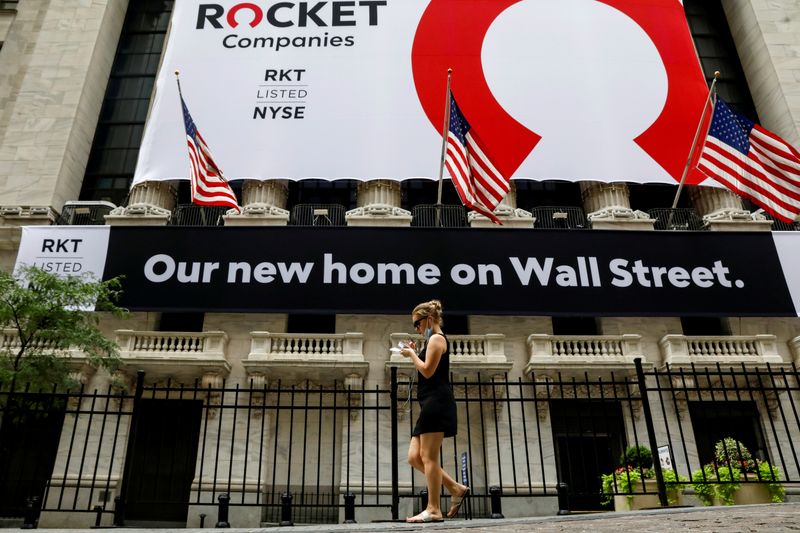 (Reuters) - Heavily shorted mortgage provider Rocket Companies saw its stock surge on Tuesday, in an eye-popping move reminiscent of the rallies that powered GameStop (NYSE: GME) and other so-called meme stocks earlier in the year.

Shares of Rocket, the parent company of Quicken Loans, closed up 71.2% at $41.60 after being halted several times for volatility. More than 367 million shares changed hands in the stock's busiest trading day ever.

The outsized move puts Rocket among the stocks that have experienced wild gyrations after becoming a focus of investors on sites such as Redditâs WallStreetBets, where mentions of the company have multiplied in recent days. The company's market cap rose by more than $34 billion to $82.6 billion.

Shares of Rocket Companies are also heavily shorted, leaving them vulnerable to a phenomenon known as a short squeeze, where investors betting against a company's shares are forced to unwind their positions after a rally in the stock price.

A short squeeze, sparked in part by retail investors coordinating on WallStreetBets, helped fuel a more than 1,600% run in GameStop's shares in January, before they pared much of those gains the following month.

"This feels very much like a retail-driven move and also probably a short squeeze,â said Barclays analyst Mark DeVries.

The value of Rocket shares shorted stood at $1.2 billion as of Monday's close, accounting for nearly 46% of the float, compared with 35.5% at the beginning of February, according to Ihor Dusaniwsky, managing director of predictive analytics at S3 Partners.

The firm issued a report titled "Rocket Shorts are Crashing and Burning" and Dusaniwsky referred to the trading activity as "GameStop-esque.â

Jefferies analyst Ryan Carr on Feb. 25 raised his price target on the stock to $30, from $27.50, after the company reported fourth-quarter results that handily beat Wall Street expectations.

While Rocket has been growing quickly, some experts have warned that the U.S. housing market could experience a slowdown later in 2021, even as low interest rates fuel refinancings.

As a result, some investors have snubbed the initial public offerings of mortgage lenders. Rocket had to slash the size of its offering by about a third due to lackluster demand when it debuted in August.

Mentions of Rocket on WallstreetBets have shot higher in recent days, according to website SwaggyStocks.com, which tracks comments on the forum.

Other stocks followed closely by retail investors were lower Tuesday, with shares of GameStop closing down 1.8% while headphone maker Koss Corp tumbled 14.6% and AMC Entertainment fell 2.7%.