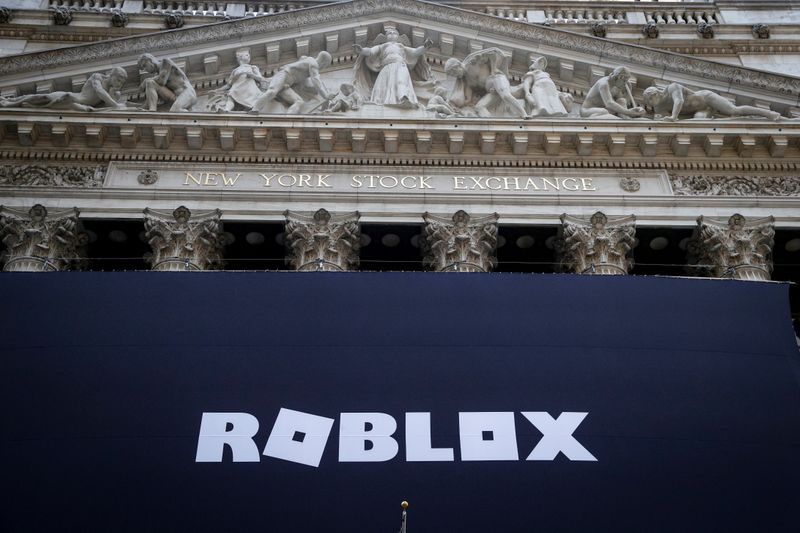 The Roblox logo is displayed on a banner, to celebrate the company's IPO, on the front facade of the New York Stock Exchange (NYSE) in New York, U.S., March 10, 2021. REUTERS/Brendan McDermid

(Reuters) - Shares of Roblox Corp jumped on Thursday, building on the gaming platform's almost 55% rise on its stock market debut a day earlier, as well-known stockpicker and exchange-traded fund operator Cathie Wood bought into the company.

The California-based company's stock was up 5.3% in late morning trades, after having risen more than 20% earlier in the day, also boosting the value of the shares held by founder David Baszucki - known to Roblox users as his avatar "builderman" - to more than $4.6 billion.

Wood's ARK Next Generation Internet exchange-traded fund (ETF) said it had bought more than 500,000 shares of Roblox, weighting it at 0.47% of the fund and adding to the strongest opening ever for a direct stock market listing.

"Roblox's blockbuster debut mirrors other gaming and broader tech IPOs that have gone live in the last six months, with high levels of demand on the secondary market after the company lists," John Patrick Lee, ETF Product Manager at VanEck, said.

Wood, a long-time Tesla bull, has a massive online following and is a popular topic of discussion among the social-media savvy herd of small-time traders on the Reddit forums behind disproportionate surges in beaten-down stocks of some companies.

Message volumes on Roblox on trading-focused social media site Stocktwits soared more than nine-fold on Thursday, with more than 80% of users' messages reflecting positive sentiment toward the scrip, data showed.

ARK Invest on Wednesday also sold a little over 67,000 Facebook shares from the ARKW ETF, amounting to about 0.3% of the ETF's assets.

Roblox was founded in 2004 by Baszucki and Erik Cassel, although its journey began in 1989 when Baszucki and Cassel programmed a 2D simulated physics lab Knowledge Revolution that would later lay the groundwork for the company.

After the sale of Knowledge Revolution in 1998, the duo began work on Roblox. Cassel died in 2013 after battling cancer for three years.

Baszucki joined the tech billionaire's club after the site was valued at nearly $30 billion in a funding deal late last year. His stake was valued at $4.58 billion on Wednesday, according to Reuters calculations.

Usage and spending on Roblox has surged as kids stuck at home in the COVID-19 pandemic spent more time on the platform, fuelling an 85% year-on-year jump in daily active users in 2020 and a surge in monthly in-app sales.

"Regardless of short-term market dynamics or events, we believe that companies in the video games industry have several growth opportunities ahead," said Pedro Palandrani, research analyst at ETF provider Global X.

An average 37.1 million people globally log on to Roblox daily to connect with friends and play popular games like "Jailbreak", "Adopt Me!" and "Speed Run 4".