Power to the players: Wall Street levels up in Reddit rally 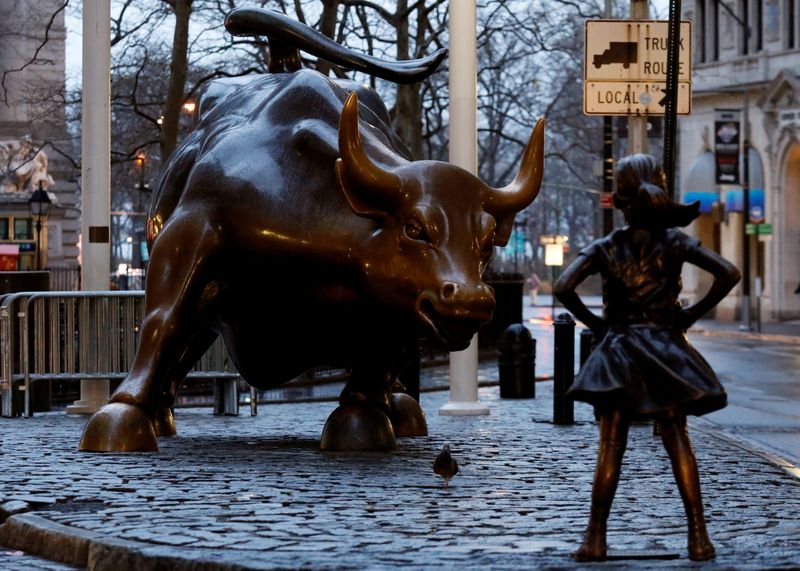 FILE PHOTO: A statue of a girl facing the Wall St. Bull is seen, as part of a campaign by U.S. fund manager State Street to push companies to put women on their boards, in the financial district in New York, U.S., March 7, 2017. REUTERS/Brendan McDermid/F

By Matt Scuffham and Jessica DiNapoli

NEW YORK (Reuters) - Wall Street was contemplating big wins from the Reddit-fueled retail frenzy in stocks such as GameStop on Thursday, even though many hedge funds in its ranks were nursing losses.

Shares in GameStop, whose motto is "power to the players", and other heavily shorted stocks such as AMC Entertainment, BlackBerry, Koss Corp and Express Inc soared this week, as traders on Reddit and other social media platforms snapped them up.

These trades forced hedge funds 'shorting' the stocks to cover their positions, costing them billions of dollars and further fuelling a rally which caught many by surprise.

But the tide started to turn on Thursday as some top Wall Street firms disclosed how they had benefited from the feeding frenzy, while others came up with new trades to make a profit.

Silver Lake took advantage of a 301% surge in struggling movie theater chain AMC's shares on Wednesday to convert $600 million in convertible notes into its shares.

While this left Silver Lake with a $284 million gain on paper, it was not immediately clear how quickly the private equity firm could move to cash out on these shares. AMC's stock plunged by more than 60% on Thursday.

Silver Lake did not respond to a request for comment.

More Wall Street firms could seek to cash out on the stocks that traded up. The world's biggest asset manager, BlackRock, has a 13% GameStop stake that is now worth more than $2 billion, compared with $174 million at the end of December.

BlackRock did not respond to a request for comment.

Market makers such a brokerages and trading platforms are also set to benefit from the surge in trading volumes.

Trading apps such as Robinhood, brokerages such as Charles Schwab and stock options providers such as Citadel Securities LLC have all seen business soar as amateur traders and Wall Street investors drive up trading.

And as the Reddit-fueled rally ran out of steam on Thursday, some hedge funds that still had cash to invest were scouring the market for stocks to short.

Investors 'short' stocks by selling borrowed shares in a company, betting that the price will fall and that the shares can be bought back at a lower level and deliver a profit.

Some were also buying corporate credit so they are in pole position to take companies over in the event of a bankruptcy or a debt restructuring.

One popular trade is to use the profit made from shorting a stock to finance the purchase of the company's debt.

Others were looking to profit from the volatility by trading on pricing anomalies between a company's shares and its debt.

"If you can get your hands on the securities, it is very compelling to go long on the credit and short the equity," one market insider said.

"Investors are licking their chops and re-calibrating their models," the insider added, with reference to the complex computer models which sophisticated institutional investors and hedge funds use to drive their trading.