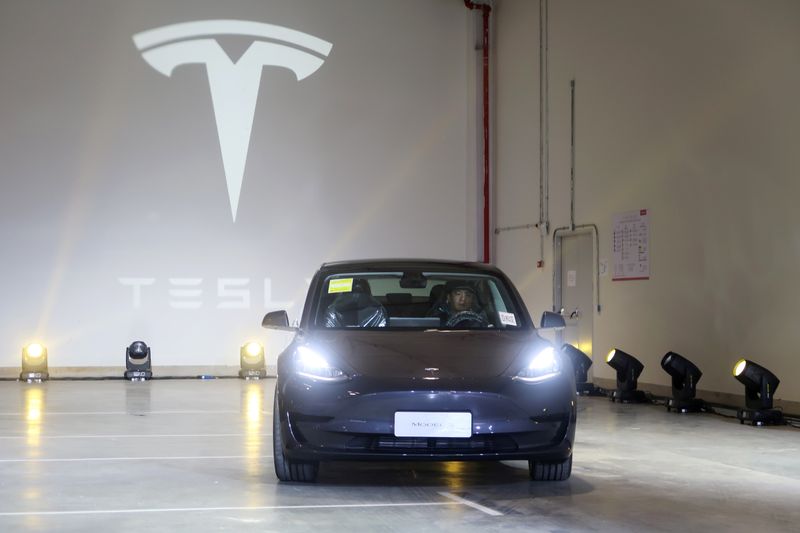 FILE PHOTO: A China-made Tesla Model 3 vehicle is seen at a delivery ceremony in the Shanghai Gigafactory of the U.S. electric car maker in Shanghai, China December 30, 2019. REUTERS/Yilei Sun/File Photo

By Munsif Vengattil and Tina Bellon

(Reuters) - Tesla Inc (NASDAQ: TSLA) beat Wall Street estimates for annual vehicle deliveries and met the low-end of its own target, sending shares to a record high in a vindication for Chief Executive Elon Musk after a few turbulent years.

Boosted by demand for its mass-produced Model 3 sedans as overseas sales pick up, Tesla on Friday said it delivered 112,000 vehicles in the fourth quarter, including 92,550 Model 3s and 19,450 Model S/X SUVs, which was above expectations of 104,960 vehicles, according to IBES data from Refinitiv.

The stock has had a strong run in recent months after posting a rare profit in the latest quarter and news of China ramp up. With a market valuation of more than $80 billion, Tesla is far outstripping those of traditional carmakers General Motors Co (NYSE: GM) and Ford Motor Co (NYSE: F).

The delivery results defy skeptics of Musk, whose mercurial behavior over the last two years came under close scrutiny from federal regulators and shareholders of Tesla.

Musk, who has more than 30 million Twitter followers, has a history of firing off tweets that resulted in an investigation by the U.S. Securities and Exchange Commission and a defamation trial against him.

The Tesla CEO settled the SEC complaint for $20 million in 2018 and a Los Angeles jury cleared Musk in the defamation case in December.

Tesla also provided an update on its Shanghai factory, which has started churning out Model 3 cars. It said the plant demonstrated a production run-rate capability of more than 3,000 units per week.

The run-rate shows that the factory appears to be ramping faster than expected, Baird Equity Research analyst Ben Kallo said. "Shanghai deliveries should be the next catalyst to drive volume growth."

The $2-billion factory, Tesla's first car manufacturing site outside the United States, is the centerpiece of its ambitions to boost sales in the world's biggest auto market and avoid higher import tariffs imposed on U.S.-made cars.

A company representative on Thursday said that Tesla will deliver its first China-made Model 3 sedans to the public on Jan. 7.

The Model 3 is Tesla's most affordable car, with lower-range versions available starting at $35,000.

Analysts in the past have questioned how rapidly Tesla's vehicle sales will grow as government subsidies for electric vehicle purchases dwindle in the United States, China and other markets. Some analysts consider those subsidies the biggest driver for Tesla purchases.

Traditional automakers largely relying on fuel-powered vehicles on Friday reported a decline in fourth-quarter U.S. sales and saw their shares tumble as a widening conflict with Iran pushed oil prices more than $2 a barrel on Friday.