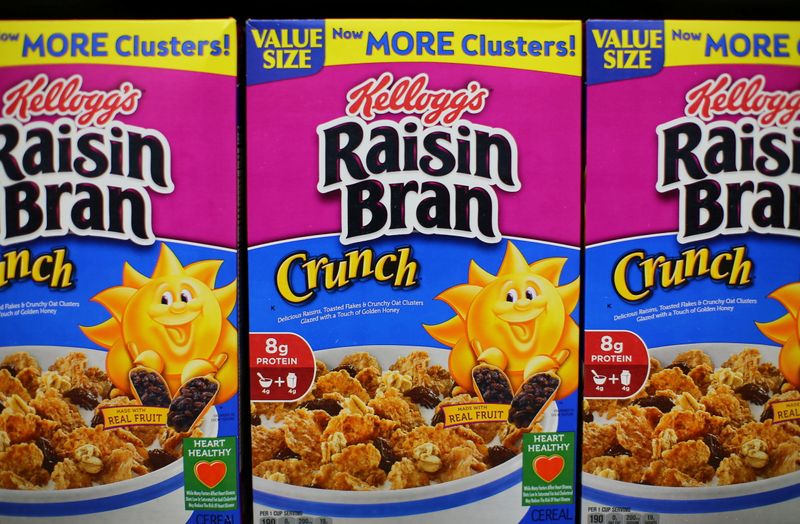 FILE PHOTO: Kellogg's cereal is shown on display during a preview of a new Walmart Super Center prior to its opening in Compton, California, U.S., January 10, 2017. REUTERS/Mike Blake/File Photo

(Reuters) -Kellogg Co said on Tuesday it plans to hire permanent replacements for some of its U.S. breakfast cereal plant workers who are on strike, after lengthy negotiations with the union again fell apart.

The workers went on strike on Oct. 5 after their contracts expired the previous day, as negotiations over payment and benefits stalled due to differences between Kellogg and about 1,400 union members at its cereal plants.

After the latest setback in negotiations, Kellogg said it was left without a choice but to move to the next phase of its contingency plans, including hiring permanent replacements.

Union members previously said Kellogg proposed a two-tier employment system that did not offer its temporary workers, who make up 30% of its workforce, a pathway to become permanent workers with better benefits and pay.

Kellogg said on Tuesday it was ready to move workers with four or more years of service to permanent positions, but added that the union was not prepared to reach a deal and did not allow members to vote on the offer.

An update from the union earlier in the day said it still had to resolve issues related to the two-tier system and offered to meet again with Kellogg the week of Dec. 6.

The workers will be voting on an offer if the union and Kellogg could reach a tentative agreement, a union leader said.

"(The union) kept giving them counter offers but after 14 hours we felt like we (are) only negotiating with ourselves," Kevin Bradshaw, vice president of the local union in Memphis, said.

Kellogg has already brought in temporary workers to fill in for striking workers and is also importing cereals to ensure supply at a time corporate America is dealing with soaring expenses.

Earlier this month, the union rejected a revised offer from Kellogg.

(Reporting by Praveen Paramasivam in Bengaluru; Editing by Shounak Dasgupta)