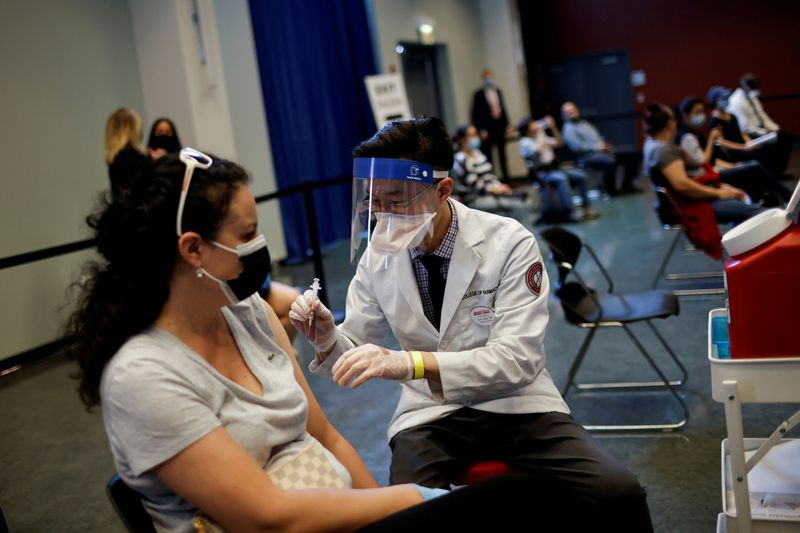 CHICAGO (Reuters) - Scientists at Johnson & Johnson on Friday refuted an assertion in a major medical journal that the design of their COVID-19 vaccine, which is similar AstraZeneca's, may explain why both have been linked to very rare brain blood clots in some vaccine recipients.

The United States earlier this week paused distribution of the J&J vaccine to investigate six cases of a rare brain blood clot known as cerebral venous sinus thrombosis (CVST), accompanied by a low blood platelet count, in U.S. women under age 50, out of about 7 million people who got the shot.

The blood clots in patients who received the J&J vaccine bear close resemblance to 169 cases in Europe reported with the AstraZeneca vaccine, out of 34 million doses administered there.

Both vaccines are based on a new technology that uses a modified version of adenoviruses, which cause the common cold, as vectors to ferry instructions to human cells.

The U.S. Food and Drug Administration is scrutinizing this design behind both vaccines to see if it is contributing to the risk.

In a letter on Friday in the New England Journal of Medicine, J&J scientists refuted a case report published earlier this week by Kate Lynn-Muir and colleagues at the University of Nebraska, who asserted that the rare blood clots "could be related to adenoviral vector vaccines."

In an interview with Reuters on Thursday, Dr. Anthony Fauci, the top U.S. infectious disease expert and an adviser to the White House, said the fact that they are both adenovirus vector vaccines is a "pretty obvious clue" that the cases could be linked to the vector.

"Whether that is the reason, I can't say for sure, but it certainly is something that raises suspicion," Fauci said.

In the correspondence on Friday, Macaya Douoguih, a scientist with J&J's Janssen vaccines division, and colleagues pointed out that the vectors used in its vaccine and the AstraZeneca shot are "substantially different" and that those differences could lead to "quite different biological effects."

Specifically, they noted that the J&J vaccine uses a human adenovirus while the AstraZeneca vaccine uses a chimpanzee adenovirus. The vectors are also from different virologic families or species, and use different cell receptors to enter cells.

The J&J shot also includes mutations to stabilize the so-called spike protein portion of the coronavirus that the vaccine uses to produce an immune response, while the AstraZeneca vaccine does not.

"The vectors are very different," said Dr. Dan Barouch of the Center for Virology and Vaccine Research at Harvardâs Beth Israel Deaconness Medical Center in Boston, who helped design the J&J vaccine.

"The implications of issues with one vector for the other one are not clear at this point," he said in an interview earlier this week.

The J&J scientists said in the letter there was not enough evidence to say their vaccine caused the blood clots and they continue to work with health authorities to assess the data.

A panel of advisers to the U.S. Centers for Disease Control and Prevention are expected to meet on April 23 to determine whether the pause on use of the J&J vaccine can be lifted.