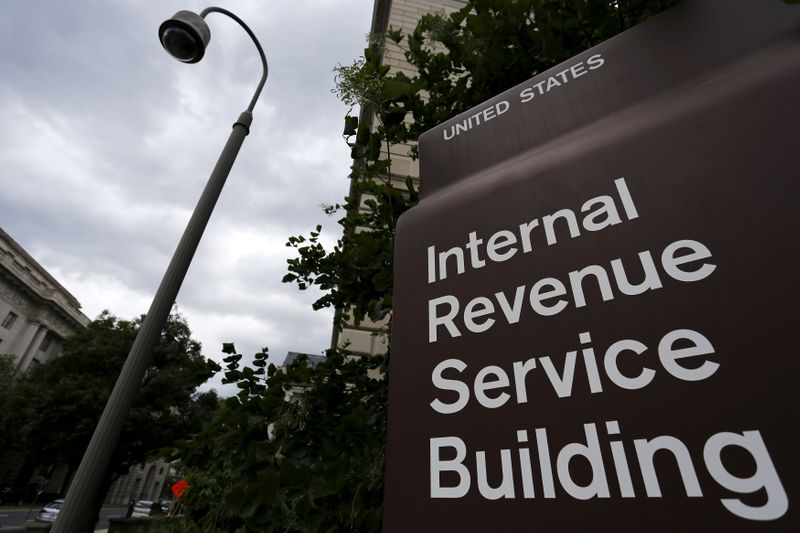 A security camera hangs near a corner of the U.S. Internal Revenue Service (IRS) building in Washington May 27, 2015. REUTERS/Jonathan Ernst

WASHINGTON (Reuters) - The U.S. Internal Revenue Service said on Wednesday it was extending the federal income tax filing and payment deadline by about a month until May 17 due to the coronavirus pandemic, bowing to pressure from congressional Democrats.

In a statement, the IRS said the extension would be automatic, with no need to file any forms and no penalties or interest on taxes due that are paid between April 15 and May 17.

The move marked a reversal of the IRS' earlier stance, which was to maintain as normal a tax-filing season as possible in order to speed refunds to households. A year ago, as coronavirus lockdowns began, the IRS delayed the filing and tax payment deadline by three months, to July 15.

IRS Commissioner Charles Rettig said the delay was because of the "tough time for many people" caused by the pandemic.

"Even with the new deadline, we urge taxpayers to consider filing as soon as possible, especially those who are owed refunds," he said in a statement, adding that filing electronically with direct deposit also could help taxpayers quickly get any coronavirus stimulus payments they are owed.

The Treasury said earlier on Wednesday it had sent out some 90 million direct payments to Americans worth $242 billion since Friday, a day after President Joe Biden signed into law a $1.9 trillion COVID-19 relief plan.

House of Representatives Ways and Means Committee Chairman Richard Neal and Oversight Subcommittee Chairman Bill Pascrell, who had pressed the IRS for a delay this year, praised the decision.

"Under titanic stress and strain, American taxpayers and tax preparers must have more time to file tax returns," the two Democrats said in a statement.

House Democrats had been demanding that the IRS issue an extension, in part because this year's tax filing season started about two weeks later than last year, giving households struggling with the pandemic less time to file. They also raised concerns about a backlog of unprocessed returns even as the agency is responsible for distributing a new round of aid payments.

Rettig is due to testify on Thursday at a hearing before the Ways and Means oversight panel.

"He would be on the defensive if the IRS didnât announce an extension," said Nina Olson, executive director of the Center for Taxpayer Rights.

"The filing season was delayed at the beginning, so pushing it back to May 17 reflects that delayed start but doesn't push it so far into the summer that the IRS just gets further and further behind in processing," Olson said.