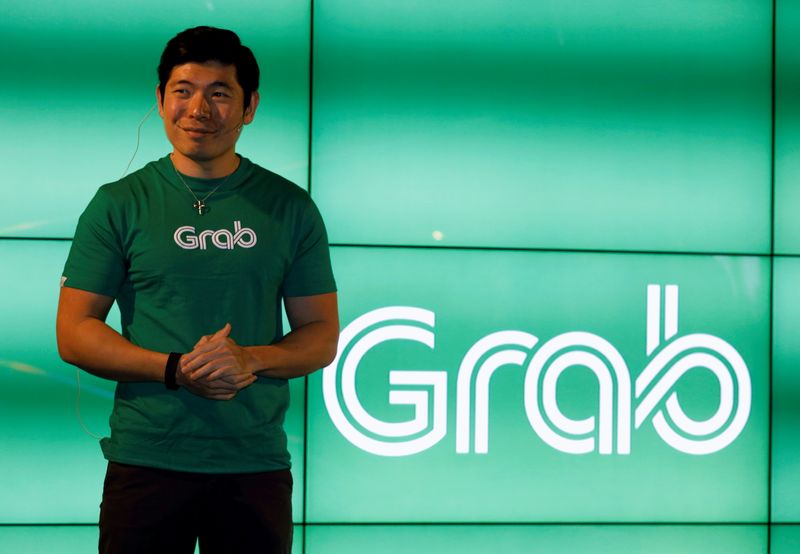 By Anshuman Daga and Aradhana Aravindan

SINGAPORE (Reuters) -The CEO of Grab, a popular app to book taxis, order food and make payments in Southeast Asia, has always been determined to win -- from making his firm the best-funded regional start-up to defeating behemoth Uber Technologies.

On Tuesday, Anthony Tan set another record when Grab Holdings agreed to list on Nasdaq through a $39.6 billion merger deal with a blank-check company, Altimeter Growth Corp.

The transaction will be the world's largest merger involving a so-called special purpose acquisition company (SPAC). The accompanying $4 billion fundraising from global investors is also set to be the biggest ever U.S. equity offering by a Southeast Asian company.

"Anthony focuses on what to do, and executes it well," said Chua Kee Lock, chief executive officer of Singapore-based venture capital firm Vertex, an early investor in Grab.

The deals validate the 39-year-old co-founder's strategy to go hyper local and expand further in a region whose digital economy is estimated to triple to $309 billion by 2025.

"This might be a precedent set not necessarily just from the point of view of start-ups themselves but from global investors starting to have their eyes open to the Southeast Asian opportunity," said Usman Akhtar, who leads Bain & Co.'s Southeast Asia private equity practice.

Tan and co-founder Tan Hooi Ling, who are unrelated, created Grab from a Harvard Business School venture competition plan in 2011. They launched a taxi app in Malaysia in June 2012 and then took it regional.

And while the charismatic Tan is the scion of one of Malaysia's wealthiest families, he decided to strike it out as an entrepreneur.

"He is a very determined character and does not give up easily," said Chua.

That resolve came in handy in Grab's costly five-year battle with Uber, when Tan told employees that when "a local champion stays true to their beliefs and strengths, they can prevail."

Uber exited the region in 2018 by selling its business to Grab and in return took a stake in the company.

But the COVID-19 pandemic also plunged Grab into its biggest crisis after demand for ride-hailing services tanked, forcing it to lay off about 5% of its staff.

"Anthony always had in mind a significant business that could include services beyond ride-hailing," said Frank Cespedes, a senior lecturer at Harvard Business School, who supervised the Tans' team in the business plan competition.

Those who have worked with Tan say he is passionate about Grab and has tremendous energy. Last year, when people mostly worked from home in Singapore, Tan often spent 15 hours a day at his standing desk, sometimes exercising with dumbbells.

He often jokes that he and his wife need to stay active to manage their three toddlers. They are expecting another child.

While Grab is still loss-making like many early-stage high-growth tech companies, Tan said the firm, which has more than 7,000 employees, started thinking about a listing nearly a year ago.

Only this year, it seriously considered going public via a merger with a SPAC after receiving many offers.

Sources familiar with the matter said the IPO process was code named "Iron Man" while the SPAC route was dubbed "Superman."

"Superman is a good guy and he would go all out to serve society," Tan told Reuters in an interview on Tuesday.

Grab's funding comes as rivals including Gojek and Sea are also bulking up.

"Other founders, other entrepreneurs and the region will be able to attract even more capital, because now we've shown that investors can make money, can exit," said Tan.

Tech companies view the region of 650 million people as a big opportunity, but the markets' diversity has tripped up some global firms.

Much of Grab's success has been due to Tan's relentless drive to localise. It accepted cash when Uber only allowed card payments. Grab also moved early to offer motorcycle taxi rides in traffic-clogged countries of Vietnam and Indonesia.

After shifting its headquarters to Singapore, Grab gained access to some of the world's biggest investors and talent.

"Grab's sharp focus allows them to go very deep into the eco-system and be relevant across a person's everyday life," said Keith Magnus, Asia co-chairman at boutique investment bank Evercore, which was among Grab's advisers on the SPAC deal.