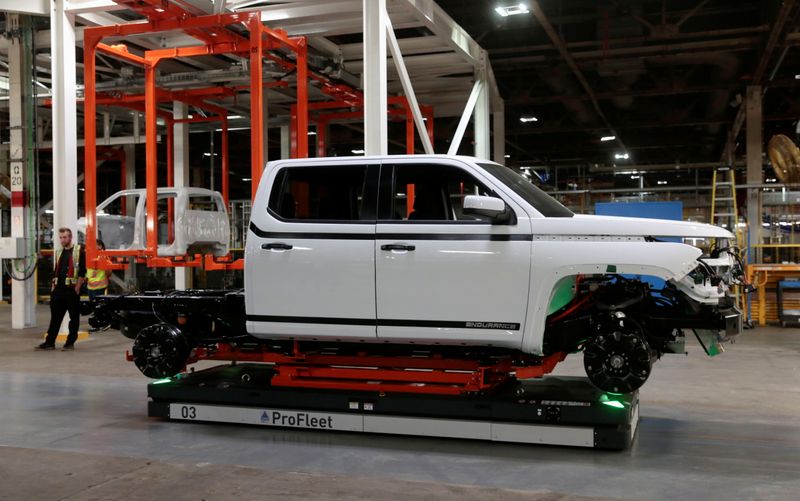 FILE PHOTO: A Lordstown Motors pre-production all electric pickup truck, the Endurance, is seen after being merged with a chassis at the Lordstown Assembly Plant in Lordstown, Ohio, U.S., June 21, 2021. REUTERS/Rebecca Cook

WASHINGTON (Reuters) -Global technology firm Foxconn and startup Lordstown Motors Corp said on Friday they plan to pursue a U.S. Energy Department loan from a program to help pay for the costs of retooling a factory to build electric trucks.

Foxconn agreed in principle to buy a Lordstown assembly plant in northeast Ohio for $230 million and take over production of a new pickup truck, the companies said on Thursday. In January, Lordstown said it was in advanced talks with the department for a retooling loan.

Lordstown shares were down 12.5% in early trading on Friday.

Lordstown told Reuters in January 2020 it was pursuing a $200 million loan from the program and it formally applied in May 2020. The Energy Departmentâs Advanced Technology Vehicles Manufacturing (ATVM) program, which previously awarded loans to Tesla, Ford and Nissan to retool factories, has not made any new loans since 2011.

The companies hope to complete a purchase agreement by Oct. 31 and complete the deal by April 30.

Foxconn, the world's largest contract electronics maker, best known for assembling Apple's iPhone, will invest $50 million in Lordstown equity. Lordstown Motors plans to enter into a long-term lease for a portion of the existing facility for its Ohio-based employees, and Foxconn plans to offer employment to many Lordstown employees.

Lordstown, which has struggled to launch production of its Endurance pickup, had previously said it was in talks to build vehicles for other automakers or lease space in its factory. It currently uses only 20% of the plant's 6.2 million square feet.