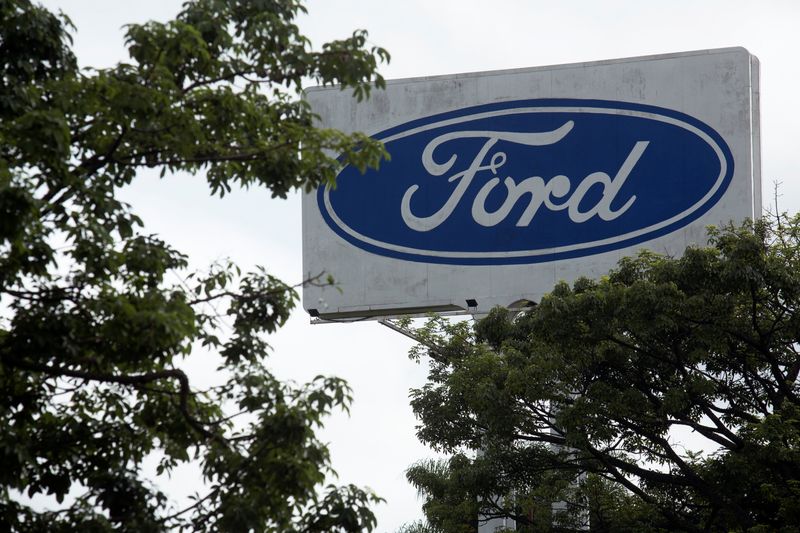 FILE PHOTO: Ford logo is pictured at Ford Motor Co plant, after the company announced it will close its three plants in the country, in Taubate, Brazil, January 12, 2021. REUTERS/Carla Carniel NO RESALES. NO ARCHIVES

WASHINGTON (Reuters) - Ford Motor Co confirmed on Friday the U.S. Justice Department and California Air Resources Board have closed a lengthy investigation into the No. 2 U.S. automaker's emissions certification process without taking any action.

Ford said in a securities filing that reviews by the U.S. Environmental Protection Agency and Environment and Climate Change Canada remain open.

Ford first disclosed the criminal probe in April 2019 and earlier hired outside law firm Sidley Austin and experts to investigate its vehicle fuel economy and testing procedures after employees raised concerns about analytical modeling that is part of its fuel economy and emissions compliance process.

Ford said Friday the investigations' closure was "consistent with the companyâs own investigation and conclusion that we appropriately completed our certification processes."

Ford declined to releasing findings from its own investigation and said it has not changed any fuel economy ratings as a result.

Ford faces a class-action lawsuit from owners who claim Ford "cheated on its fuel economy testing on some of its best-selling and most popular trucks" and said the issue affected over a million Ford truck owners.

The lawsuit claims that "independent testing conducted on Ford F-150 and Ford Ranger vehicles has vindicated the concerns of both consumers and Fordâs own employees: Ford did not follow appropriate coastdown testing procedures, and instead disclosed inaccurate resistance figures to increase the MPG Rating of its F-150 and Ranger vehicles." Coastdown testing measures the effects of wind and road resistance on a coasting vehicle.

Ford declined to comment on the lawsuit Friday but argues in court papers it should be dismissed, saying owners are "implausibly claiming that Ford had a duty to disclose the 'true fuel economy' for the subject vehicles, as if such a figure actually exists."