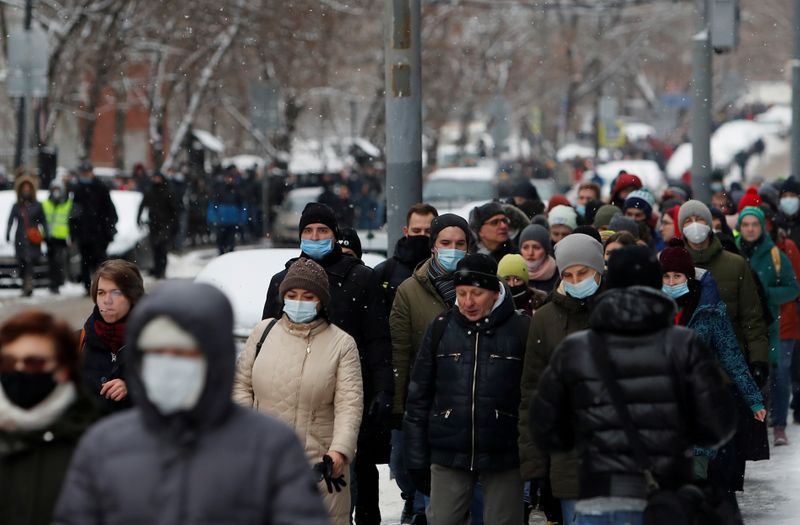 MOSCOW (Reuters) - Russian authorities are considering a new social spending package worth at least $6.7 billion to address discontent over falling living standards before an autumn election, according to two government sources.

The package, which one of the sources said President Vladimir Putin was likely to unveil in an annual speech to senior political figures in coming weeks, follows unsanctioned nationwide protests last month that hit the value of the rouble.

Kremlin spokesman Dmitry Peskov did not comment specifically on the plans for a new social spending package, but denied any such move by the government would be designed to dampen protests. He said any such link "did not correspond to reality."

A spokesman for Prime Minister Mikhail Mishustin said he was not immediately aware of the proposal.

The trigger for the recent protests was the arrest of opposition politician and Kremlin critic Alexei Navalny, who was detained on his return to Russia following treatment in Germany after he was poisoned by a nerve agent in Siberia last August.

Some protesters also said they had taken to the streets to vent their frustration over declining living standards and the perceived gap between a small number of wealthy people and the rest of the population.

The two government sources, speaking on condition of anonymity because they were not authorised to speak to the media, told Reuters the spending package was meant to make people feel the authorities are aware of their financial concerns and are doing something to help them.

The new aid package would be worth around 500 billion roubles ($6.74 billion), the first government source said.

The second said the package would be worth 0.5% of Russia's 2021 projected gross domestic product, which, according to Reuters calculations, would amount to around 580 billion roubles ($7.81 billion).

While the average wage rose to the equivalent of around $660 in late 2020, real incomes that are adjusted for inflation fell 3.5% last year and unemployment was close to 6% for first time since 2011.

The economy, hit hard by the coronavirus pandemic, suffered its sharpest contraction in 11 years in 2020. Inflation hit 5.2% last month - above the central bank target of 4% - and is accelerating.

The sources disclosed no details of how the money might be spent. Such programmes have in the past targeted low-income families with small children, offering allowances for first-time mothers and higher payments for families with more children.

Putin has repeatedly promised to lift living standards but the COVID-19 pandemic coupled with low oil prices saw incomes fall 8.4% in the second quarter of 2020, year-on-year, in what became the deepest quarterly decline since 1999.

The West has condemned Moscow over the treatment of Navalny and said it will consider new sanctions against Russia.

Fitch said the possibility of further social unrest posed no short-term risks to the stability of the government, but that it could complicate the ruling United Russia party's efforts to secure a constitutional majority in an election to the lower house of parliament, or Duma, that is due on Sept. 19