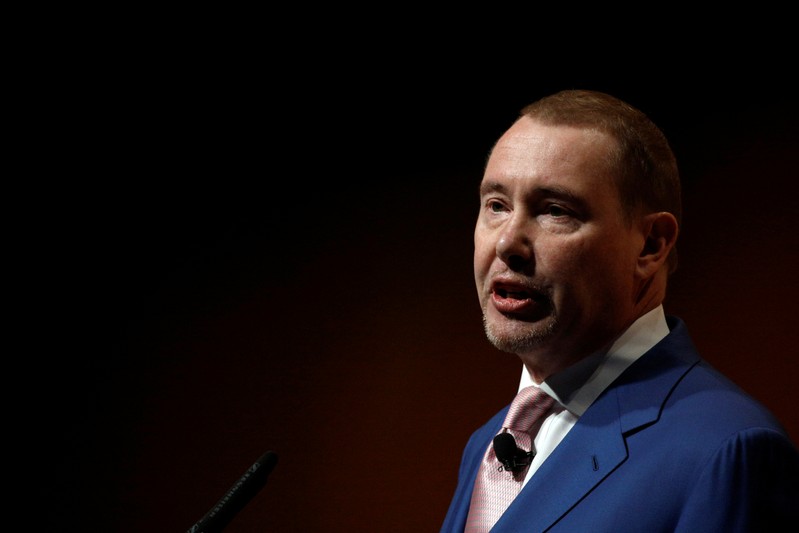 Gundlach told Reuters the Treasury yield curve from two- to five-year maturities is suggesting "total bond market disbelief in the Federal Reserve's prior plans to raise rates through 2019."

U.S. two-year Treasury yields rose above three-year Treasury yields on Tuesday for the first time in more than a decade as traders piled on bets the Fed might be close to ending its rate-hike campaign. The Dow Jones Industrial Average closed down nearly 800 points, or 3.10 percent, and the Standard & Poor's 500 fell over 90 points, or 3.24 percent.

"If the bond market trusts the Fed’s latest words about 'data dependency' then the totally flat Treasury note curve is predicting softer future growth (and) will stay the Fed’s hand," said Gundlach, who oversees more than $123 billion in assets.

"If that is indeed to be the case, the recent strong equity recovery is at risk from fundamental economic deterioration, a message that is sounding from the junk bond market, whose rebound has been far less impressive," he said.

Yield curve inversions are seen generally as precursors of a recession. An inversion of the two-year and 10-year yields has preceded each U.S. recession in the past 50 years.

So far, there has been no inversion of the two-year and 10-year. The benchmark 10-year yield clung to an 11-basis-point margin over its two-year counterpart, although it was the smallest in over a decade.

Gundlach said Fed policymakers will need to be especially careful in their choice of words when they meet on Dec. 18-19 to deliver on their promised rate hike.

"There can’t be another screwup like last time, when they dropped 'accommodative' but simultaneously characterized the Fed funds rate as 'a long way' from neutral," Gundlach said. "Seems likely they will hike. They kind of promised and the markets would get scared if they flipped. Like the airline passenger who hates turbulence and gets calmed down if the stewardess looks unafraid. If the stewardess starts freaking out though, watch out."

Fed Chairman Jerome Powell reversed his tone last week, when he said the U.S. central bank's policy rate is now "just below" neutral, a level at which rates neither boost nor put the brakes on the economy.

Overall, Gundlach said there are bear markets in equities of homebuilders, autos and some banks. "Keep it simple ... Quantitative Tightening is bad for stocks."