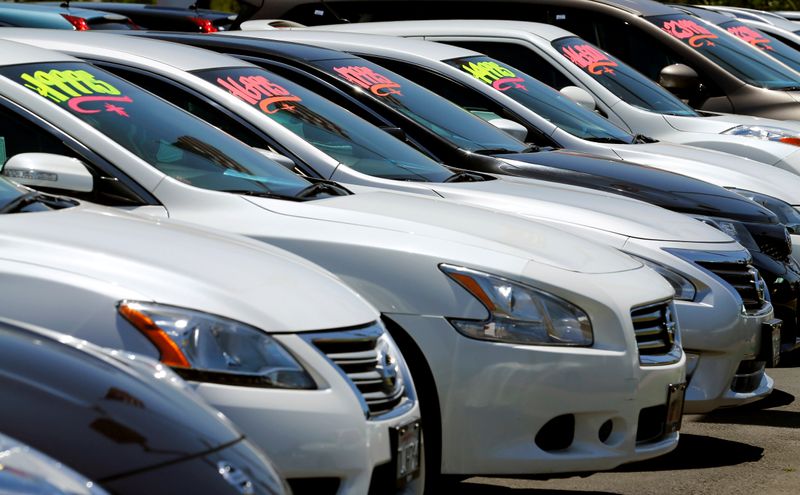 FILE PHOTO: Automobiles are shown for sale at a car dealership in Carlsbad, California, U.S. May 2, 2016. REUTERS/Mike Blake/File Photo

DETROIT (Reuters) - U.S. new vehicle sales likely drove off a cliff in March as the coronavirus pandemic pounded consumer confidence and shuttered dealerships across much of the country, and sales are likely to take a further beating in April as social distancing guidelines remain in place.

"When you look at March, we basically lost half the month," said Eric Lyman, chief industry analyst at car-shopping website TrueCar.com (NASDAQ: TRUE).

TrueCar has forecast a sales drop for March of 37 percent and Lyman said sales in April could also be off between 50 percent to 60 percent.

A rebound for the sector will likely depend on how long the crisis lasts and what level of support the U.S. government provides for consumers in the meantime.

Tesla Inc (NASDAQ: TSLA) also typically reports first quarter deliveries during the week after the quarter ends. Analysts had expected the company to deliver about 93,000 vehicles during the quarter, according to Refinitiv. Tesla Chief Executive Elon Musk on March 19 suspended production at the company's Fremont, California, assembly plant under pressure from local authorities.

Just how bad March was is an open question. Cox Automotive did not release a monthly forecast, but said its data showed that on March 27, new vehicle sales to consumers fell 55 percent versus the same day in 2019.

In U.S. states under "stay-at-home" orders, sales fell as much as 80 percent to 90 percent, Cox estimated. Those include states like California and New York, home to a large portion of the American car-buying population.

IHS Markit estimates the coronavirus pandemic will cut full-year 2020 sales by 15.3 percent and globally sales will fall 12 percent - "considerably worse" than the fall in sales during the Great Recession in 2008-2009.

But U.S. consumer confidence plunged in March to the lowest level since October 2016 as the coronavirus epidemic upended life for Americans.

George Augustaitis, director of automotive industry analytics at CarGurus Inc (NASDAQ: CARG), an online marketplace for new and used cars, said a rebound in new vehicle sales will depend on government support for workers laid off during the crisis.

"If these consumers are taken care of, we should see the market rebound fairly quickly," Augustaitis said.