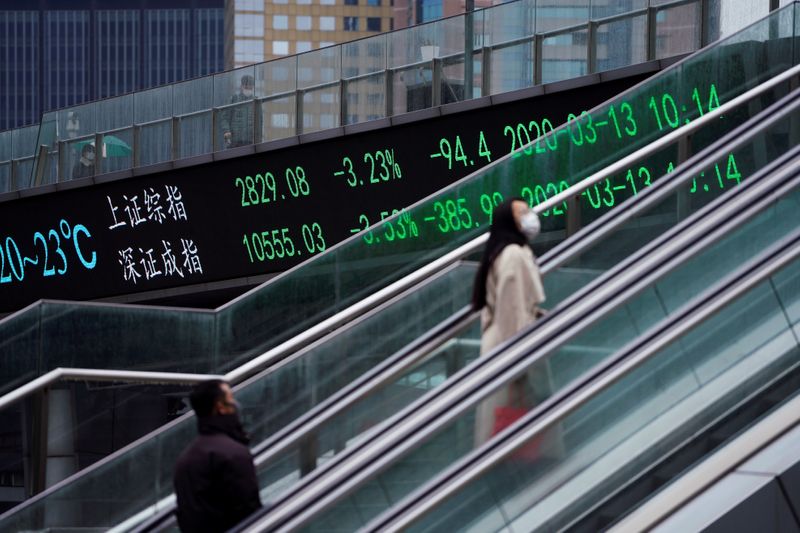 FILE PHOTO: Pedestrians wearing face masks ride an escalator near an overpass with an electronic board showing the Shanghai and Shenzhen stock indexes, following an outbreak of the novel coronavirus in the country, at Lujiazui financial district, in Shang

BEIJING (Reuters) - China's economic growth is set to stumble to its slowest annual pace in nearly half a century, as the coronavirus health crisis shutters businesses and brings the global economy to a standstill, a Reuters poll showed on Tuesday.

China's leaders have pledged to take more steps to combat the impact from the pandemic that looks likely to delay a recovery in the virus-ravaged economy, as mounting job losses pose a threat to social stability.

Growth in the world's second-biggest economy for 2020 was forecast at 2.5%, according to the median of 62 analysts surveyed by Reuters, which would mark the weakest clip since 1976, the final year of the decade-long Cultural Revolution that wrecked the economy.

The survey also predicted China's economy in the first quarter will contract by 6.5% year-on-year, for the first time since at least 1992 when the country first started issuing quarterly gross domestic product (GDP) data.

It also marks a reversal from 3.5% growth forecast in the last survey done in the previous month. China will release its first-quarter GDP data on April 17.

The projected 2020 growth would be weaker than the 3.9% rate in 1990, when the economy was hit hard after the Tiananmen crackdown, but still outperform a 1.6% contraction in 1976.

The forecasts highlighted the challenges faced by the Asia's engine of growth given an immediate recovery looked some way off as the global pandemic hits exports, despite a sharp slowdown in China's virus infections from its peak in February.

Early in the outbreak, Beijing imposed draconian travel restrictions and factory suspensions to curb the spread of the disease, but at a heavy price.

As the number of new domestic cases are now easing, the government is slowly relaxing emergency measures and exhorting industries to reopen. But analysts say the pace of recovery in the coming months will be heavily constrained by external headwinds.

The virus has spread rapidly around the world, prompting unprecedented shutdowns in many countries, which has wreaked havoc along global supply chains and severely hurt overseas demand, raising the risk of a steep global recession this year.

"Despite its initial success in containing COVID-19, China is still faced with two dire challenges: nosediving external demand due to the pandemic, and the rising threat of a second wave of the virus," said economists with Nomura, adding that the hope of a quick recovery is dimming.

The slump in China's exports and imports eased in March, customs data showed on Tuesday, but analysts say the overall outlook remains grim as the pandemic has brought business activity in its major trading partners to a standstill.

The health crisis has dealt a particularly heavy blow to the country's private sector, which is the most productive part of the economy and a key source of employment.

The small and privately-owned firms are facing a severe cash crunch to tide over a prolonged downturn, with many laying off workers or shutting down businesses.

"Lingering fear of the virus and uncertainty over job losses mean people are remaining cautious. We expect household consumption to be negatively affected for many months to come and see only a gradual sequential recovery from Q2 onwards," said Louis Kuijs, economist at Oxford Economics.

The negative growth shock has already prompted a raft of monetary policy response from the central bank, but so far its easing has been more measured than during the global financial crisis.

Sources told Reuters the People's Bank of China (PBOC) will ramp up its policy easing to support the economy but will not follow the U.S. Federal Reserve's steep rate cuts or quantitative easing moves, mindful of debt and property market risks.