Biden willing to negotiate on corporate taxes, but 'sick and tired' of non-payers 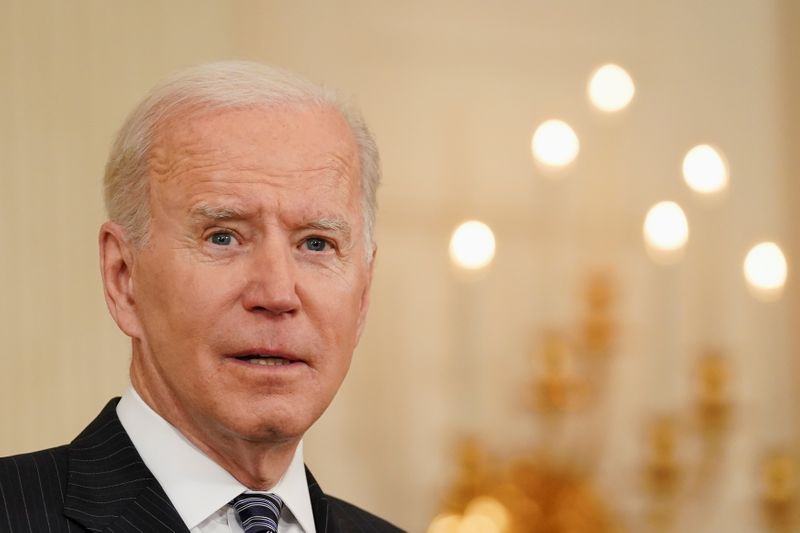 By Trevor Hunnicutt and Jeff Mason

WASHINGTON (Reuters) -President Joe Biden on Wednesday made a fiery appeal for U.S companies to foot most of the bill for his $2 trillion-plus infrastructure plan, but signaled an openness to negotiate over exactly how much they would have to pay.

"I'm willing to negotiate that," he told reporters. "But we've got to pay for this."

Biden faces stiff opposition from Republicans, major corporations and even some in his own Democratic Party to elements of the proposal he laid out a week ago, which must be approved by Congress to become a reality.

The president argued that the United States' position as a pre-eminent global power was under threat from China if the investments he outlined were not made, saying it would be unacceptable not to move forward.

"America is no longer the leader in the world because we're not investing," Biden said. "I don't know why we don't get this."

China, he said, is "counting on American democracy to be too slow, too limited and too divided to keep pace" and "we can't afford to prove them right."

Biden's plan would not add to the country's debt in the long run, the White House says. The largest share of funding would come from an increase in the corporate tax rate to 28% from the 21% levy set by then-President Donald Trump's 2017 tax cut.

The administration released more details on Wednesday about the tax components of the plan, which also includes higher levies on companies' overseas earnings, a new minimum tax on the profits companies report to investors and funding for more Internal Revenue Service enforcement officials.

Those efforts, dubbed the "Made in America Tax Plan," would raise $2.5 trillion over 15 years, the Treasury Department said.

Reuters interviewed more than a dozen corporate and White House officials engaged in the infrastructure push. Most expect the White House and business groups to compromise on a 25% corporate tax rate.

The business lobby and Republicans have been withering in their criticism of the funding side of the proposal.

Still, Senate Minority Leader Mitch McConnell left open the possibility of compromise. He told reporters in Kentucky on Wednesday that an infrastructure bill could win Republican support if it targets traditional projects involving roads, bridges and broadband without "completely revisiting" the 2017 tax cut.

One of Biden's closest allies in the Senate, Democrat Chris Coons of Delaware, issued an ultimatum to Republicans on Wednesday. He said they would have until the end of May to negotiate a compromise bill before Democrats move sweeping legislation on their own.

A ruling by the U.S. Senate parliamentarian on Monday would allow Democrats to pass the bill even in the face of a Republican filibuster, relying on a tie-breaking vote from Vice President Kamala Harris in the 50-50 chamber. Sixty votes are usually needed to overcome filibusters.

Coons told Punchbowl News that several senior Senate Republicans have privately signaled they would support a package of up to $1 trillion that targets roads, bridges and other typical infrastructure areas and includes some tax increases to pay for legislation.

U.S. Chamber of Commerce chief policy officer Neil Bradley said the need for infrastructure was no excuse for passing "tax hikes that will hurt American businesses and cost American jobs."

Biden countered by taking aim at companies paying little to nothing in federal taxes.

"I'm not trying to punish anybody, but damn it - maybe it's because I come from a middle-class neighborhood - I'm sick and tired of ordinary people being fleeced," he said.

Individual taxpayers, whose taxes are deducted from their paychecks, make up a big chunk of U.S. federal government funding.

But the carefully worded statement stopped short of endorsing any specific tax or spending proposal made by Biden.