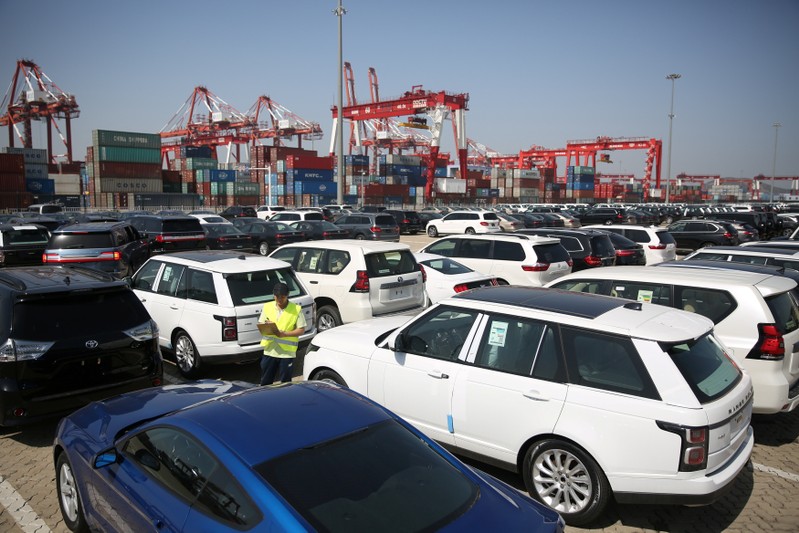 A worker inspects imported cars at a port in Qingdao, Shandong province, China May 23, 2018. REUTERS/Stringer

(Reuters) - Automakers' shares rose on Tuesday following a report that China could move to cut tariffs on American-made cars, a step which was forecast by U.S. President Donald Trump after a meeting with China's president in Argentina.

China is moving to cut import tariffs on American-made cars to 15 percent from the current 40 percent, Bloomberg reported on Tuesday citing people familiar with the matter.

The step hasn't been finalized and could still change, according to the report.

Shares of U.S. automakers including General Motors Co (NYSE: GM) and Ford Motor Co (NYSE: F) rose about 2 percent in premarket trading on hopes that the move could revitalize sales that took a hit when China ramped up levies on U.S.-made cars.

European auto stocks <.SXAP> also rallied 2.8 pct on the news, as several of the carmakers build SUVs in the United States and sell in China.

A proposal to reduce tariffs on cars made in the U.S. to 15 percent has been submitted to China's Cabinet to be reviewed in the coming days, according to the report.

Beijing had raised tariffs on U.S. auto imports to 40 percent in July, forcing many carmakers to hike prices.

The news would also be beneficial for Tesla Inc (NASDAQ: TSLA) that has been hit hard by increased tariffs on the electric cars it exports to China.

The U.S. firm, led by billionaire Elon Musk, has said it will cut prices to make its cars "more affordable" and absorb more of the hit from the tariffs. Tesla is also building a local plant in Shanghai to help it avoid steep tariffs.

"China has agreed to reduce and remove tariffs on cars coming into China from the U.S. Currently the tariff is 40%," Trump had tweeted last week.

(Reporting by Rachit Vats in Bengaluru; Editing by Shounak Dasgupta)