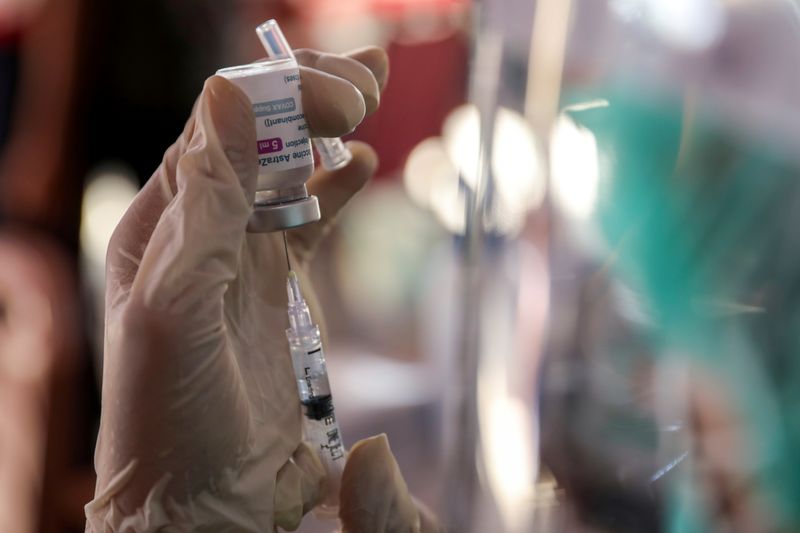 By Kate Kelland and Julie Steenhuysen

The rare public rebuke marks the latest setback for the vaccine once hailed as a milestone in the fight against the COVID-19 pandemic that has since been dogged by questions over its effectiveness and possible side effects.

AstraZeneca said results it published on Monday in which the vaccine had demonstrated 79% efficacy were based on an interim analysis of data through Feb. 17, and it would now "immediately engage" with the independent panel monitoring the trial to share its full analysis.

The British-based drugmaker on Tuesday said it had reviewed the preliminary assessment of its full, or primary, analysis and found it to be consistent with the interim report.

But the Washington Post reported that the data monitoring panel told federal officials they had been working with the company through March, had seen data that showed the vaccine might be 69% to 74% effective, and had "strongly recommended" AstraZeneca include that information in its public statement.

The U.S. National Institute of Allergy and Infectious Diseases (NIAID) said on Monday that the independent monitoring panel had expressed concern the company may have included outdated data that gave an incomplete view of the shot's effectiveness.

"This kind of thing does ... nothing but really cast some doubt about the vaccines and may contribute to the hesitancy," he told ABC's "Good Morning America."

"The data really are quite good but when they put it into the press release it wasn't completely accurate," he said.

In addition to the 79% efficacy in stopping symptomatic illness in the trial conducted in the United States, Chile and Peru, the data reported on Monday also showed the shot was 100% effective against severe or critical forms of the disease and posed no increased risk of blood clots.

Dr. Larry Corey, co-leader of the U.S. Coronavirus Vaccine Prevention Network, which helped design AstraZeneca's U.S. trial, said the monitoring panel's rebuke was something he had not seen before. The virologist at Fred Hutchinson Cancer Research Center in Seattle, praised the panel for speaking up, saying it showed the system of checks and balances worked.

One U.S.-based investigator who was not authorized to speak publicly said AstraZeneca was not wrong to publish an analysis it had described as interim and expressed concern over the public controversy.

"It's just a little bit like shooting yourself in the foot, because the science is good," the person said.

The new questions about the shot's efficacy coincide with its rollout in dozens of countries and clouds the timeline for its potential emergency use authorization in the United States.

"This is indeed an extraordinary act. The negative reports about this vaccine do not stop, although my assessment is that it is well tolerated and safe, but clearly less effective than the two mRNA vaccines," said Peter Kremsner, from the University Hospital in Tuebingen, Germany.

Vaccines from Pfizer/BioNTech and Moderna that use messenger RNA (mRNA) technology to produce an immune response both had efficacy rates of about 95% in their pivotal clinical trials, far above the 50% benchmark set by global regulators.

AstraZeneca's COVID-19 shot has faced questions since late last year when the drugmaker and Oxford University published data from an earlier trial with two different efficacy readings as a result of a dosing error.

Confidence in the vaccine took a further hit this month, when more than a dozen countries, mostly in Europe, temporarily suspended giving out the shot after reports linked it to a rare blood clotting disorder in a very small number of people.

The European Union's drug regulator said last week the vaccine was clearly safe, but an opinion poll on Monday showed Europeans remained skeptical about its safety.

The AstraZeneca vaccine is seen as crucial in tackling the spread of COVID-19 across the globe because it is easier and cheaper to transport than rival shots.

It has been granted conditional marketing or emergency use authorization in more than 70 countries.

Many countries are relying heavily on the shot to end the pandemic, and several state leaders have taken it publicly to boost confidence.