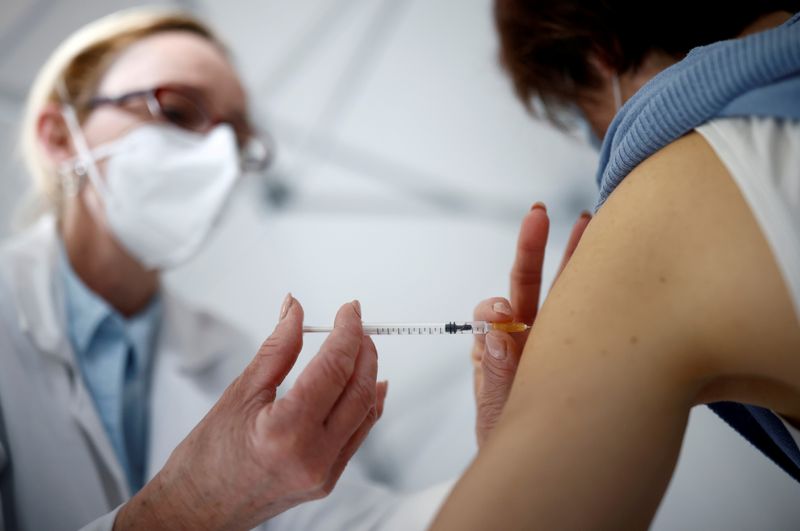 FILE PHOTO: A nurse administers the Oxford-AstraZeneca COVID-19 vaccine to a member of the medical staff at a coronavirus disease (COVID-19) vaccination center in La Baule, France, February 17, 2021. REUTERS/Stephane Mahe/

BRUSSELS (Reuters) - AstraZeneca has again angered the EU by scaling back deliveries of COVID-19 vaccines, but got a boost on Friday when the World Health Organisation dismissed fears that have prompted countries in Europe and Asia to suspend use of the shot.

The European Union has been much slower to start mass vaccination than neighbouring Britain because of a slower approval and purchasing process and repeated supply hold-ups.

EU regulators have dismissed scattered reports of blood clots in people who had received the AstraZeneca vaccine, but on Friday Thailand joined a handful of European countries in suspending use of the shot - the first and cheapest to be developed and launched at volume around the world.

An AstraZeneca document dated March 10, seen by Reuters and shared with EU officials, shows that the Anglo-Swedish drug maker expects to have delivered 30 million doses to the EU by the end of March - 10 million less than it pledged only last month, and only a third of its contractual obligation.

A company spokesman declined to comment, but a person familiar with the situation said there had been difficulties with international supply chains.

Industry executives have warned of manufacturing problems as countries try to protect their own supplies of vaccines, ingredients and the equipment to make, bottle and transport them.

Washington has told Brussels that it will not allow AstraZeneca shots made in the United States to be exported in the near future, Reuters reported on Thursday.

And last week Italy and Brussels blocked a shipment of AstraZeneca vaccines from Italy to Australia, in the first application of a mechanism that allows the EU to refuse export requests from vaccine makers that break EU supply contracts.

The company has acknowledged production problems in the EU, but also said it expected to ship some output to the EU from the United States.

Its contract pledges "best reasonable efforts" to meet a target of 300 million doses for the EU by the end of June.

"I see efforts, but not 'best efforts'. That's not good enough yet," EU industry commissioner Thierry Breton tweeted on Thursday.

Germany said it was talking to Washington about missing shipments of COVID-19 vaccines from the United States, noting that more than 30 countries including the United States were receiving vaccines made in the EU.

The EU programme has also been upset in the last two weeks by the reports of blood clots.

On Thursday, Denmark and non-EU members Norway and Iceland suspended their use of the vaccine. Austria and Italy have stopped using specific batches.

But on Friday the WHO said the vaccine was "excellent" and that no causal link had been established to the blood clots.

"It's very important to understand that, yes, we should continue to be using the AstraZeneca vaccine," spokeswoman Margaret Harris told a briefing. "All that we look at is what we always look at: Any safety signal must be investigated."

AstraZeneca said on Thursday it had found no evidence of increased risk of deep vein thrombosis in more than 10 million recipient records.

And the EU regulator, the European Medicines Agency (EMA), said on Wednesday that the number of clots reported in people who had received the AstraZeneca vaccine was no higher than in the general population.

Bulgaria said it would suspend use of the vaccine until it saw written guidance from the EMA, but German Health Minister Jens Spahn told reporters on Friday that his country was following the EMA guidance.

"Everything we know so far suggests that the benefits of the vaccine, even after every individual case reported, are greater than the risks, and that continues to be the case," he said.

Germany, the most populous country in the EU, is due to receive about 6 million doses from AstraZeneca by the end of April, the document seen by Reuters shows, with France getting 4.7 million and Italy 4.4 million.

"We are still in a phase of absolute scarcity," Spahn said.