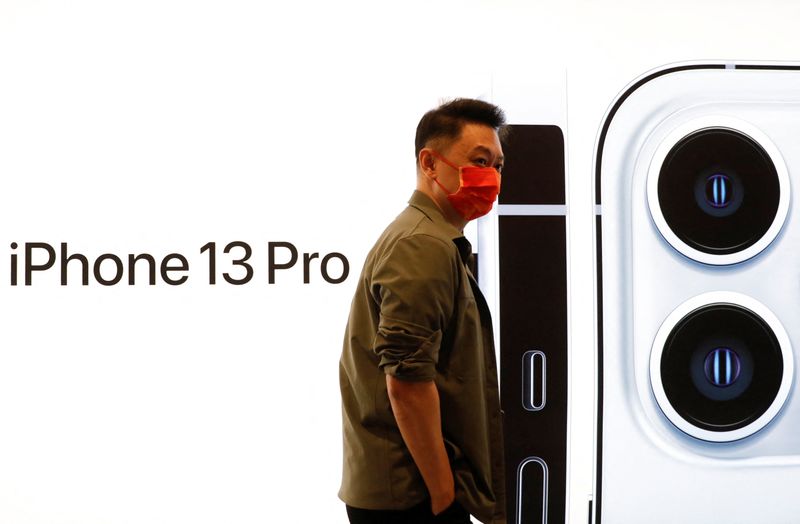 A man wearing a face mask walks past an image of an iPhone 13 Pro at an Apple Store on the day the new Apple iPhone 13 series goes on sale, in Beijing, China, September 24, 2021. REUTERS/Carlos Garcia Rawlins

BEIJING (Reuters) -Apple Inc achieved its highest-ever market share in China in the fourth quarter, when it was the top-selling vendor there for the first time in six years, research firm Counterpoint Research reported on Wednesday.

The milestone coincided with the release of the iPhone 13, and amid otherwise stagnant demand for handsets as chief rival Huawei Technologies Co Ltd's [HWT.UL] market share declined.

Apple's smartphone market share reached 23%, a record for the brand. Its unit sales volume grew 32% year-on-year in the quarter, while total smartphone sales in China fell 9%, according to Counterpoint.

Counterpoint analyst Mengmeng Zhang cited a lower starting price in China and the impact of U.S. sanctions against Huawei, Apple's main competitor in the high-end segment, as factors.

Apple last ranked as China's top-selling smartphone brand in late 2015, just after the company launched its iPhone 6, which attracted Chinese consumers with their large screens.

In 2021 as a whole, Apple ranked as China's third best-selling smartphone brand with 16% of the market.

Vivo and Oppo, two Android handset brands under the privately-owned BBK Electronics, ranked first and second with 22% and 21% respectively.

A global chip and component shortage has meanwhile rattled the entire electronics industry, affecting pricing and margins for all hardware makers.