Apple and Tesla are splitting their shares, but does it matter? 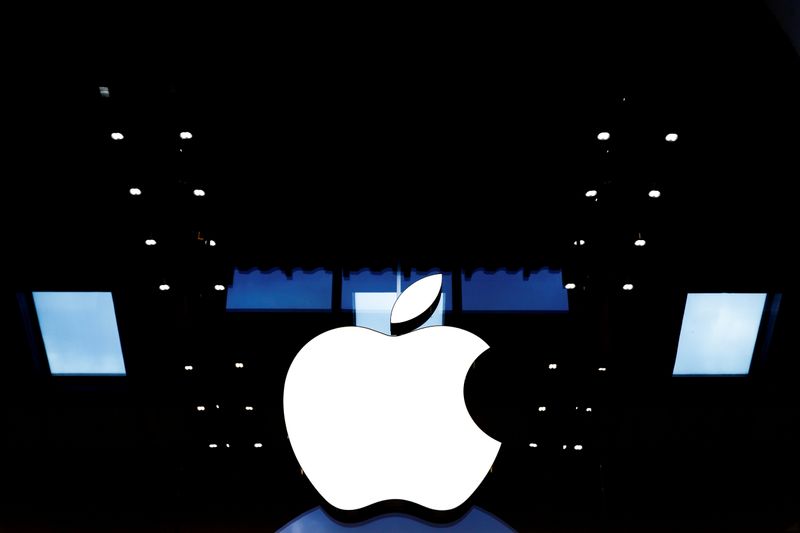 FILE PHOTO: The Apple logo is seen on the Apple store at the Marche Saint Germain in Paris, France July 15, 2020. REUTERS/Gonzalo Fuentes/File Photo

NEW YORK (Reuters) - Shares of Apple Inc (NASDAQ: AAPL) and Tesla Inc (NASDAQ: TSLA) will be less costly on Monday as pre-announced stock splits take effect, in theory making them more accessible to retail investors, but as more brokers offer fractional shares, some in the market question the need.

Investors cheered the Apple and Tesla announcements, helping extend a rally in the companies' shares, which along with many other technology firms, have soared in value as the market emerged from its pandemic-induced depths in March.

That made owning a piece of these companies seem out of reach of many Main Street investors. Apple closed at over $500 a share on Thursday, while Tesla continued its meteoric rise on Thursday to above $2,200 a share.

Both Apple and Tesla said their actions, a 4-1 and 5-1 split respectively, would let more investors access their shares.

But in the past year, online brokerages like Robinhood, Charles Schwab Corp (NYSE: SCHW), and Fidelity, along with several smaller shops, have begun offering slices of individual shares.

"Fractional share ownership, all else equal, really does render the price of a stock irrelevant," said Julian Emanuel, chief equity and derivatives strategist at BTIG.

That, combined with commission-free trading at most brokerages, has made it easier for anyone with a mobile device to own a piece of a company.

"People my age grew up with technology and we like to invest in technology-related companies, like Tesla and Amazon (NASDAQ: AMZN) and Google (NASDAQ: GOOGL), and if it weren't for fractional shares we wouldn't really be able to take advantage of that," said Jaidan Craig, a support technician.

Craig, 23, said he has been investing for two or three years, first on Robinhood, which lets people invest as little as $1 in any listed company, and then moved to a broker called M1, which emphasizes diversifying your investments. He said that without fractional investing, he could not have built as well-rounded a portfolio.

While fractional shares have been used for years by mutual funds, they have not as been widely available for stocks until recently, and not every brokerage offers them, helping maintain the appeal of stock splits on some platforms.

TD Ameritrade, a online trading pioneer that is being bought by rival Schwab for $26 billion, does not offer fractional shares, but said it is looking at them.

It noted that in past years, when companies, such as Apple, Google, Mastercard Inc (NYSE: MA) and Visa Inc (NYSE: V), split their shares, retail trading volumes tripled.

"We have historically seen that our retail investors use stock splits as trading opportunities, accessing popular names that may have gotten too expensive pre-split," said JJ Kinnahan, TD Ameritrade's chief market analyst.

Just three S&P 500 <.SPX> members have announced splits in 2020, compared with an average of 10 a year over the past decade, according to S&P Dow Jones Indices.

Those companies that have split their shares in the past year have, in fact, underperformed the broader S&P 500, said BTIG's Emanuel, who likened the current state of fractional investing to the beginning of a baseball game.

"The fact that we're in the first inning of it, and yet you have seen a relative underperformance of split shares versus the S&P 500 in 2020, really points to the powerful nature of it," he said.

(This story fixes headline to make it "are splitting" instead of "split".)