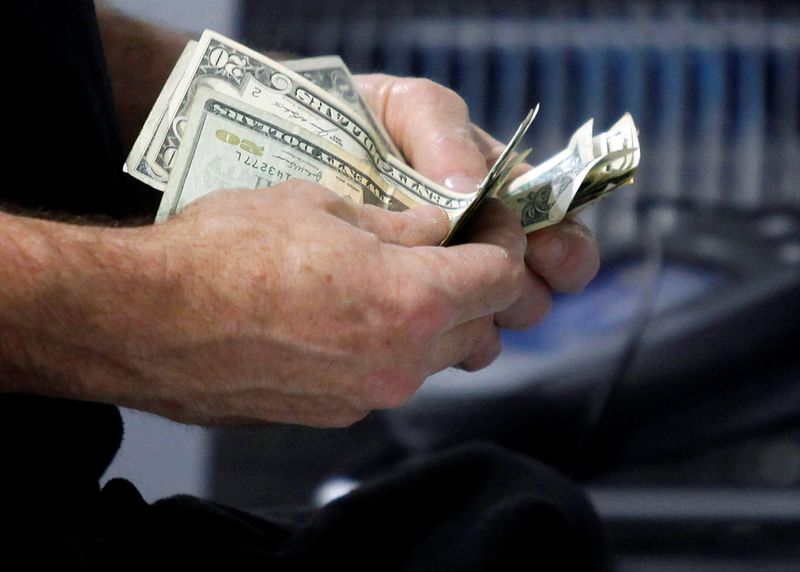 FILE PHOTO: A customer counts his cash at the register while purchasing an item at a Best Buy store in Flushing, New York March 27, 2010. REUTERS/Jessica Rinaldi

WASHINGTON (Reuters) - The Federal Reserve's mission is to maintain "stable prices," but Chair Jerome Powell's take on that may seem surprising: He doesn't really care if people pay more for stuff.

Instead, Powell last week flagged a nuanced but critical shift in Fed strategy putting more weight on the psychology surrounding inflation and less on how prices actually behave.

The two influence each other, but new data touted by Fed policymakers shows just how set in stone public views of inflation have become - hugging close to their 2% target since the 1990s even as prices cavorted up and down.

A new quarterly series, the Fed's Index of Common Inflation Expectations, combines a range of survey and market data into one barometer of future inflation risk. Public expectations about future prices and earnings are central to how inflation actually behaves, and the index shows those expectations are both glacially slow to move and still low.

Insofar as expectations have moved in recent years, they have been drifting steadily lower, a trend that risked a difficult-to-reverse, Japan-style situation where prices, wages, and interest rates ratchet down together.

Those facts have given the Fed both motivation for and confidence in a new policy aiming to run inflation above its 2% target and leave it there for some time. The hope is a "hot" economy will benefit workers through more jobs and higher wages, but won't disrupt public attitudes about where prices and wages are expected to head over time.

It's a calculated gamble inflation will behave as it did before the pandemic, and that if something unanticipated happens the Fed will be deft enough to fix it.

THE 'UFO' OF ECONOMICS

Central banking is often about managing public perceptions, and Powell may be facing a test for the ages. Fed officials just projected the strongest three-year run of price increases since the housing boom in the early 2000s, but policymakers insist for now they'll watch from the sidelines.

"Expectations are central to the story" of why the Fed is holding back any discussion of interest rates increases, said Vincent Reinhart, chief economist at Mellon and a former Fed staffer. Moreover, public belief in the Fed's readiness to keep inflation under control is anticipated to help actually keep it at bay.

The Fed is willing to stomach some inflation "as long as expectations don't get dislodged," he said. "If they do, it will be a costly mistake because it will be hard to get down again."

The process of how expectations change is the "unidentified flying object" of economic theory, Reinhart said. It's out there but not well understood, and best approached with caution.

The Fed's credibility on inflation was hard won in the 1970s and 1980s when a combination of shocks and bad policy sent prices soaring. It responded with punishing interest rates - the average 30-year home mortgage was more than 18% in late 1981 versus about 3% now - and the economy suffered two sharp recessions in two years.

The benefits, however, have persisted: Inflation has been tame ever since.

Perhaps too tame. Since publicly setting its 2% target in 2012, the Fed rarely hit it, and a decade of weak inflation was creating another risk: price and wage growth so tepid it might slip backwards.

While fast-rising prices erode household spending power, systematically falling ones inhibit growth. For the Fed and other major central banks, 2% became the consensus level of inflation they felt would keep economies moving forward without weighing on households or distorting spending and investment decisions.

RISKS OF A NEW MOUSETRAP

Fed officials last year concluded they had been too strict in managing that target and so focused on keeping their inflation-fighting credibility they had misread how the economy was evolving. Inflation no longer appeared tightly tied to unemployment, but was generically low - perhaps because of technology or globalization, or because central banks themselves had successfully set a mood against it.

After years of soul searching, the Fed concluded that meant booms could run longer, allowing jobs and wage pressure to accumulate without rising inflation.

The new approach seems to be working. The pandemic dealt the expectations index a blow last spring, but it moved higher later in the year. An update is due in April.

Another signal also points in their favor. The expected inflation rate 10 years out implied by longer-term inflation-linked securities is below the comparable 5-year rate implied by shorter-term ones.

That suggests investors trust the Fed's ability to let inflation rise above 2% for a time and to pull it back into place without the disruption of earlier inflation battles, said Jim Caron, portfolio manager for Global Fixed Income at Morgan Stanley.

Graphic: A market vote for the Fed? - https://graphics.reuters.com/USA-FED/INFLATION/xegvbglnnpq/chart.png

"It is a risk whenever you say you have a new mousetrap," Caron said. "But they are correct that the broader secular forces of disinflation are still there."

For Powell, the coming months may take some explaining, and last week he went into detail about why the anticipated post-pandemic sticker shock won't be considered a problem.

There'll be "a fairly significant pop" in inflation this year, Powell acknowledged, as people emerge from their pandemic cocoons and rev up spending. "You can only go out to dinner once per night, but a lot of people can go out to dinner."

However ultimately the renewed appetites of a society locked down for the past year will settle back somewhere close to normal, with inflation expectations intact.

"It'll turn out to be a one-time sort of bulge," he said.