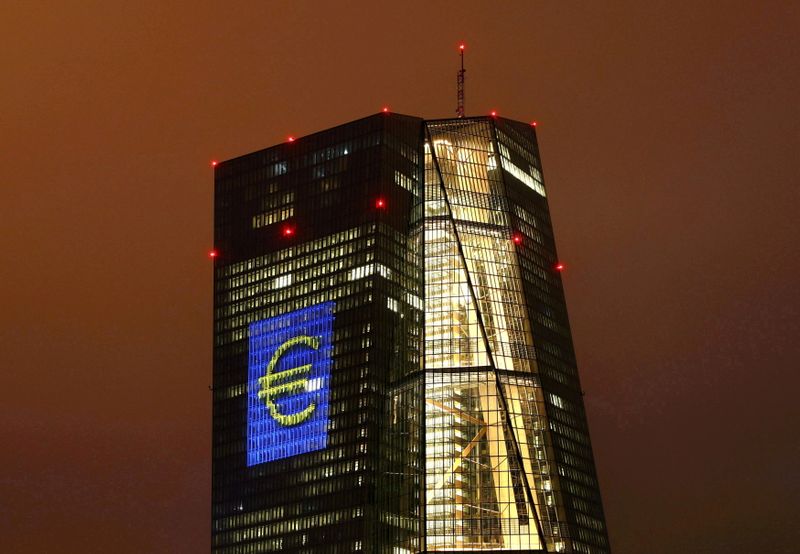 The European Central Bank pledged on Thursday to keep interest rates at record lows for even longer to help sluggish inflation in the euro zone rise back to its elusive 2% target.

ECB President Christine Lagarde told a news conference the bank was committed to "a persistently accommodative monetary policy stance to meet our inflation target". She said however the change in language was not backed by all ECB policymakers.

The euro initially edged lower but by 1345 GMT, it was up 0.25% while euro zone bond yields fell, with Italian 10-year borrowing costs hitting three-month lows.

For a text of the ECB statement:

"As Lagarde explained in the press conference, the ECB Council will use "judgement" to assess if and when the conditions for a rate hike are met at some time in the future. The changes in the wording of the statement do not constrain such judgement calls for either the doves or the hawks. No revolution in Frankfurt. For a central bank, that is actually re-assuring.

"The ECB currently projects 1.4% inflation for 2023 and seems to expect only modest upward pressures on inflation on trend. Taken at face value, the statement suggests that the ECB may only raise rates in 2025 if the ECB were then to project a rise of inflation to at least 2% by mid-2027."

"The reaction in the bond market: 'the new guidance might generate faster inflation......but it also might not.'

"The commitment to burning through the remaining capacity in the PEPP at a fairly quick pace may also explain the initial selloff in core rates, but when you unpack that logic, you're still left with the ECB buying more for longer, and that could lead one to believe that, when the APP is eventually boosted to supplant the PEPP, the boost might be meaningful."

"Today's dovish move, which will likely be followed by an upward adjustment in QE later this year, was enabled by the ECBâs new strategy framework unveiled on July 12. It has been made possible because, contrary to the strategy framework itself, which was agreed unanimously, the policy decisions themselves do not need to be taken by consensus.

"So even though hawks on the Governing Council may have prevented the ECB adopting any form of average inflation targeting in the strategy review, doves can potentially now shift policy in the direction of some deliberate toleration of inflation overshoots

"At the current juncture, monetary policy space in the Euro area is constrained by the effective lower bound and the ECB might struggle to re-anchor inflation expectations and to regain policy space without resorting to additional measures or getting more support from the fiscal policy side. In this context, the coming review of the European fiscal rules will be crucial. Otherwise Europe risks further eroding the monetary space it has."

"In September we believe the ECB will start to prepare for an end of PEPP and an upsize of the regular APP in 2022, to maintain easy financing conditions beyond the end of the pandemic emergency policy measures, as progress towards the inflation objective remains inadequate.

"The question of how the ECB envisions to achieve an even more ambitious target with the same old tools and configurations remains unanswered.

"Overall, this...is still as expected and should give the ECB plenty of reasons to delay any monetary tightening. The long-end (of the yield curve) could be vulnerable as some outside hopes for addressing QE differently did not materialise."

"The conditions for leaving rates unchanged may also imply a transitory period of inflation moderately above target that, again, suggests it is a tolerance rather than a desire to push inflation above the target.â

"It was a very accommodating statement. In the press conference, I believe the answers about the PEPP and how this can be modified and rebalanced will be very important. The expectations are for more dovish comments."

"The ECB has reinforced its guidance as expected to give itself leeway before raising rates. None of this will surprise much the market though it reinforces a tendency to increase duration and credit risk."

"Unfortunately, the ECB statement was very flat, simply relying on a series of adverbs to drive home its dovish shift. If the press conference follows suit, markets may be severely disappointed."

"In truth though, Lagarde is unlikely to let this opportunity go. She recognises that the ECBâs credibility has to be earned and will likely use the press conference to emphasise their inflation tolerance. Even so, the ECB will likely fall short of the Fedâs efforts â partially reflecting simmering disagreements within the Council which holds them from making fundamental change, as well as an ingrained reluctance to embrace a new, healthy inflation paradigm."

"This was a bit like old wine in a new bottle; the communication has changed somewhat but in terms of substance the ECB remains very dovish, putting a cap on any tapering speculations."

"This is more aligned to the new strategy outcome rather than a new policy signal. I note the wording on bond buying is unchanged.

"The forward guidance is a bit more dovish and allows more easy policy. The recalibration is about the duration of support rather than the size of the support."

"The language used by the ECB is now more forceful, in the sense that it is tying interest rates to its 2% target to show its strength."

"This is a key development the ECB needed to make because markets going into the meeting were unconvinced it could successfully stimulate activity and inflation....The bank really needed to show how it could be more 'forceful or persistent' around forward guidance and it didnât disappoint."

(Reporting by London markets and finance team and Krisztian Sandor in Frankfurt; compiled by Sujata RaoEditing by Tomasz Janowski)