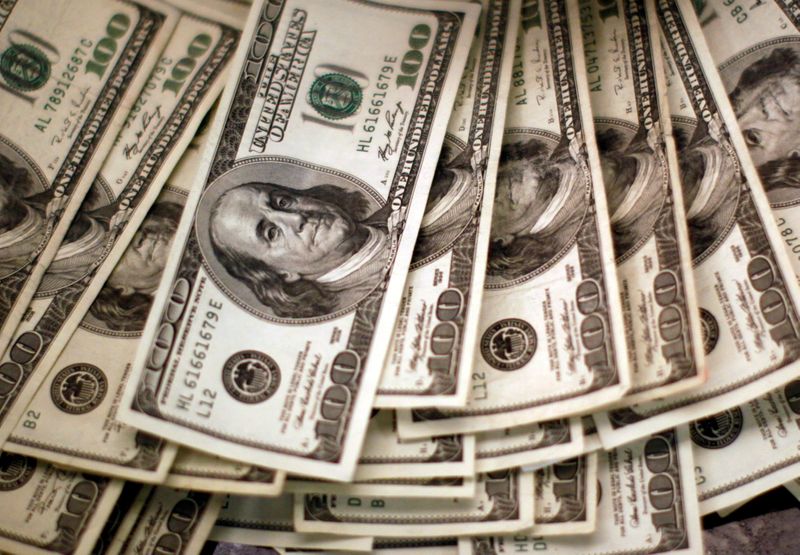 FILE PHOTO: Four thousand U.S. dollars are counted out by a banker counting currency at a bank in Westminster, Colorado November 3, 2009. REUTERS/Rick Wilking

NEW YORK (Reuters) -The dollar fell to its lowest in more than two months on Friday after U.S. jobs data for April came in well below expectations, putting a damper on hopes that a roaring economic recovery would spur higher rates and light a fire under the greenback.

Nonfarm payrolls increased by only 266,000 jobs last month after rising by 770,000 in March, the Labor Department said in its closely watched employment report. Economists polled by Reuters had forecast a rise of 978,000 jobs.

"The number was so out of consensus, that I think the market expectation of super-high rates and a squeeze on inflation is going to go down by the wayside, and that obviously means more liquidity from the Fed," said Boris Schlossberg, managing director of FX strategy at BK Asset Management.

It also means U.S. interest rates will stay at ultra-low levels for quite a while and that is going to keep the pressure on the dollar, Schlossberg added.

"This is only one report, but this is changing many traders' thinking on how this recovery is unfolding," said Edward Moya, senior market analyst at FX broker OANDA, in New York.

China's yuan rose to a more than two-month high versus the dollar and was set for its longest weekly winning streak since September, helped by the strong trade data and softer dollar.

The MSCI emerging market currency index hit a record high of 1741.34 on Friday, lifted by gains in the Chinese yuan and the weaker greenback.

Commodity-linked currencies were higher, with the exception of the Canadian dollar, which was near flat at 1.21505 to the U.S. dollar, following a worse-than-expected Canada jobs report for April due to a third wave of COVID-19 lockdowns. The loonie had surged on Thursday to its strongest in more than three years.

The Australian dollar was up 0.72% versus the U.S. dollar, at 0.7841. The Aussie has been supported by a strong rally in the prices of Australia's top export earner, iron ore.

"We expect the likes of AUD, CAD and NOK to remain well supported with the backdrop for positive optimism over global growth still quite favourable", MUFG head of research Derek Halpenny wrote in a note, referring to the Australian and Canadian dollars and Norwegian crown.

Meme-based virtual currency Dogecoin, which began as a satirical critique of 2013's cryptocurrency frenzy, was up 4.49% at $0.6107, ahead of an appearance by Tesla Inc Chief Executive Officer, Elon Musk on Saturday Night Live this weekend.

Musk's tweets about Dogecoin in the past have helped send the digital currency, which is up more than 14,000% this year alone, skyward.

"Post-SNL, some crypto traders could abandon short-term Dogecoin bets once it becomes clear that it is not skyrocketing to the moon or at the heavily eyed $1 level," said OANDA's Moya.