Dollar steady even as yields edge up ahead of U.S. jobs report 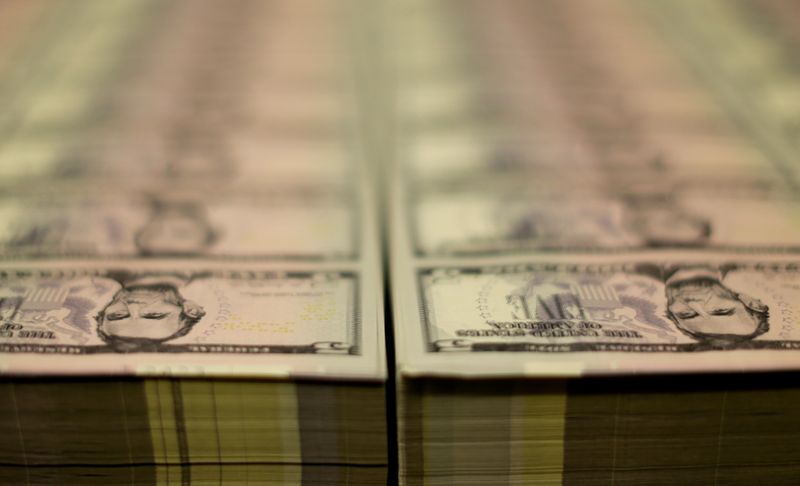 FILE PHOTO: Stacks of former U.S. President Abraham Lincoln on the five-dollar bill currency are seen at the Bureau of Engraving and Printing in Washington March 26, 2015. REUTERS/Gary Cameron

NEW YORK (Reuters) - The dollar took a breather on Thursday, a day after being given a boost from seemingly hawkish comments by a top Federal Reserve official, as the market awaited new direction from Friday's U.S. jobs report.

The dollar index against major currencies was down 0.03% to 92.249 in the afternoon in New York.

On Wednesday, Fed Vice Chair Richard Clarida said conditions for an interest rate hike could be met in late 2022, setting the stage for a move in early 2023.

The greenback, which gained 0.2% on Wednesday, was traded in a relatively tight range through the day, unmoved by new government reports on jobless claims and the trade deficit that came in close to estimates from economists.

It also shrugged off another up-day in U.S. stocks and movement in the U.S. Treasury market, where the yield on the 10-year note rose as much as 4 basis points and was last at 1.2152%.

"The market has been in a wait-and-see mode until we get past tomorrow's nonfarm payroll report," said Ed Moya, senior market analyst at broker OANDA.

Friday's employment report for U.S. employment in July is seen as highly uncertain but critical to Fed policymakers deciding when to begin tapering support for the economy.

"If we get an impressive read tomorrow, that would have the market firmly pricing in tapering and allow the yield curve to steepen and provide the dollar with support," Moya said.

According to a Reuters survey of economists, nonfarm payrolls likely increased by 880,000 jobs in July, up from 850,000 in June. Economists have warned that the spread of the Delta variant of the coronavirus and mixed readings from labor market indicators make estimates for July troublesome.

The central bank said it would start reducing its stock of bonds when its policy rate reaches 0.5% by not reinvesting proceeds and that it would consider actively selling down holdings when the rate reaches at least 1%.

Ether, the second-largest cryptocurrency, was up 3% to $2,810 after an initial dip when the Ethereum blockchain network activated a technical change that was to take some tokens out of circulation.

(Reporting by David Henry in New York and Ritvik Carvalho in London; additional reporting by Wayne Cole in Sydney; Editing by Marguerita Choy and Jonathan Oatis)