China vows to hit back over U.S. proposal for fresh tariffs 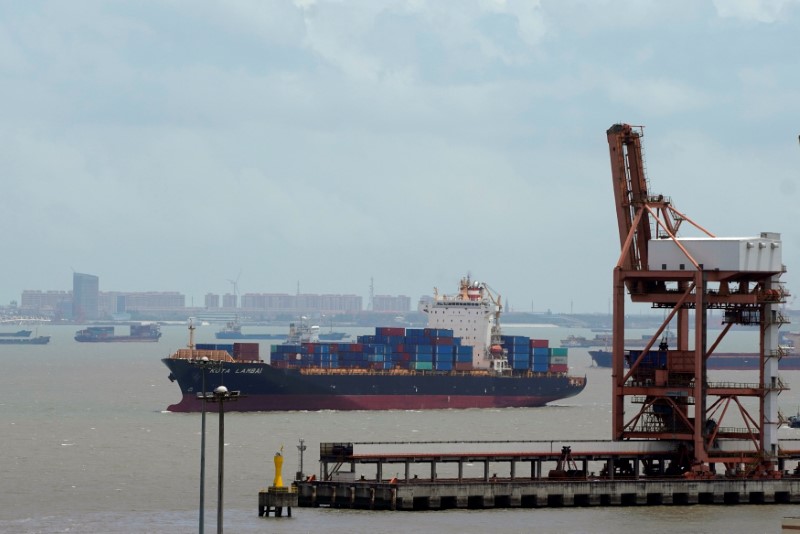 Shipping containers are seen at a port in Shanghai, China July 10, 2018. REUTERS/Aly Song

By Tony Munroe and Eric Beech

BEIJING/WASHINGTON (Reuters) - China accused the United States of bullying and warned it would hit back after the Trump administration raised the stakes in their trade dispute, threatening 10 percent tariffs on $200 billion of Chinese goods in a move that rattled global markets.

China's commerce ministry said on Wednesday it was "shocked" and would complain to the World Trade Organisation, but did not immediately say how Beijing would retaliate in the dispute between the world's two biggest economies. In a statement, it called the U.S. actions "completely unacceptable".

The Chinese foreign ministry said Washington's threats were "typical bullying" and described the dispute as a "fight between unilateralism and multilateralism".

U.S. officials on Tuesday issued a list of thousands of Chinese goods to be hit with the new tariffs. The top items by value were furniture at $29 billion of imports in 2017, network routers worth $23 billion last year and computer components to the value of $20 billion.

Some U.S. business groups and lawmakers from President Donald Trump's own Republican Party who support free trade were critical of the escalating tariffs. The Republican-controlled Senate voted 88-11 in favour of a non-binding resolution calling for Congress to have a role in implementing such tariffs.

The U.S. Chamber of Commerce has supported Trump's domestic tax cuts and efforts to reduce regulation of businesses, but does not back Trump's aggressive tariff policies.

"Tariffs are taxes, plain and simple. Imposing taxes on another $200 billion worth of products will raise the costs of every day goods for American families," a Chamber spokeswoman said.

Among the potential ways Beijing could hit back are "qualitative measures," a threat that U.S. businesses in China fear could mean anything from stepped-up inspections to delays in investment approvals and even consumer boycotts.

China could also limit visits to the United States by Chinese tourists, a business that state media said is worth $115 billion, or shed some of its U.S. Treasury holdings, Iris Pang, Greater China economist at ING in Hong Kong, wrote in a note.

The $200 billion far exceeds the total value of goods China imports from the United States, which means Beijing may need to think of creative ways to respond to such U.S. measures.

It also highlights how dependent U.S. businesses and consumers are on Chinese goods. In Trump's first round of tariffs, China accounted for 20 percent of total U.S. imports, meaning that substitutes were readily available. In this round, China accounted for more than half of the imports.

There was a price to be paid by American companies as government policies legislated winners and losers.

Home furnishing retailers are expected to be hit particularly hard because China supplies 65 percent of U.S. furniture imports, according to analysts at Goldman Sachs.

The MSCI's broadest index of Asia-Pacific shares outside Japan <.MIAPJ0000PUS> fell 1.1 percent, while the main indexes in Hong Kong <.HSI> and Shanghai <.SSEC> recovered somewhat after falling more than 2 percent.

Trump has been following through on pledges he made during his 2016 presidential campaign to get tough on China, which he accuses of unfair trade practices including theft of intellectual property and forced technology transfer that have led to a $375 billion U.S. trade deficit with China.

The U.S. president has said he may ultimately impose tariffs on more than $500 billion worth of Chinese goods, roughly the total amount of U.S. imports from China last year.

U.S. financial analysts said Trump appeared to believe there was a political benefit to waging a trade war, although that could change quickly amid economic fallout.

"It is now much more likely that the dispute will continue for a prolonged period of time and that we will see ratcheting up of protectionist measures," said Elena Duggar, an associate managing director at Moody's, the credit rating agency.