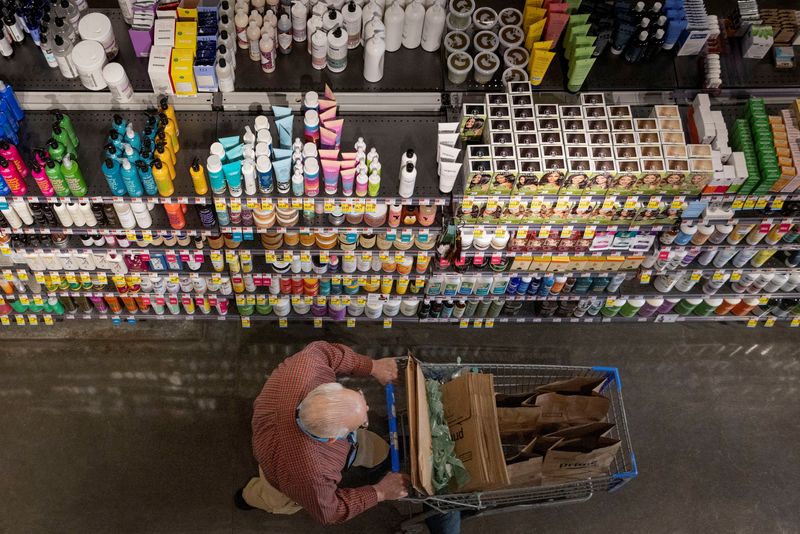 WASHINGTON (Reuters) -Calling stable prices the "bedrock" of the economy, Federal Reserve Chair Jerome Powell said on Thursday the U.S. central bank's battle to control inflation would "include some pain" as the impact of higher interest rates is felt, but that the worse outcome would be for prices to continue speeding ahead.

"We fully understand and appreciate how painful inflation is," Powell said in an interview with the Marketplace national radio program, repeating his expectation that the Fed will raise interest rates by half a percentage point at each of its next two policy meetings while pledging that "we're prepared to do more" if data turn the wrong way.

"Nothing in the economy works, the economy doesn't work for anybody without price stability," Powell said. "We went through periods in our history where inflation was quite high ... The process of getting inflation down to 2% will also include some pain, but ultimately the most painful thing would be if we were to fail to deal with it and inflation were to get entrenched in the economy at high levels, and we know what that's like. And that's just people losing the value of their paycheck."

With "perfect hindsight," Powell said, it "would have been better" to have begun raising rates earlier than March of this year, given inflation began a sharp turn higher in 2021.

After using aggressive monetary policy to support the economy through the COVID-19 pandemic, the Fed approved a quarter-percentage-point rate increase in March, but some analysts believe policymakers have fallen too far behind to curb price increases without the sort of sharp rate hikes that might cause a recession.

Powell said he believes the country can avoid a serious downturn.

But on the same day that the Senate confirmed him to a second four-year term as Fed chief in a bipartisan 80-19 vote, Powell also made the central bank's priorities clear.

Above all else, "we can't fail to restore price stability," he said.

The U.S. economy is facing its toughest inflation problem since the 1970s and early 1980s, when prices at one point rose at an annual rate of 14.5% and then-Fed chief Paul Volcker used punishing interest rates to twice throw the economy into recession. The unemployment rate climbed above 10%.

Powell has paid frequent homage to Volcker's commitment to beating inflation, while also saying he still hopes to avoid the sharp tradeoffs that Volcker used to bring prices under control.

While inflation is not approaching Volcker-era levels, the quick run-up in the cost of food, gas, housing and other daily staples has become a politically explosive issue for President Joe Biden's administration. Consumer prices in April were 8.3% higher than a year ago.

Interest rates are rising sharply as a result of the policy steps already taken by the Fed, with the rate on a 30-year fixed mortgage jumping from less than 3% last year to more than 5%, and volatile stock markets wiping out trillions of dollars in wealth that will likely prompt some consumers to spend less - and curb inflation in the process.

"If you're going to use monetary policy to get inflation under control, what you got to do is to tighten up on the consumer to reduce spending. Certain industries, most notably housing, are going to feel that pain. You're going to have mortgage rates over 6%. It's going to make it harder for potential homebuyers to buy," said Stan Shipley, a strategist at Evercore ISI.

Biden now has filled the top two Fed jobs and seen two of his other appointees confirmed to the central bank's seven-seat Board of Governors. The president made clear this week he was giving them full sway to try to lower inflation.

"Tackling inflation is my top domestic priority," the Democratic president said after Powell's Senate confirmation. The Fed "will bring the skill and knowledge needed at this critical time for our economy and families across the country."

Powell, who opened a news conference after last week's policy meeting by saying he wanted to "restore price stability on behalf of American families," used the radio interview on Thursday to amplify that broad message to the public.