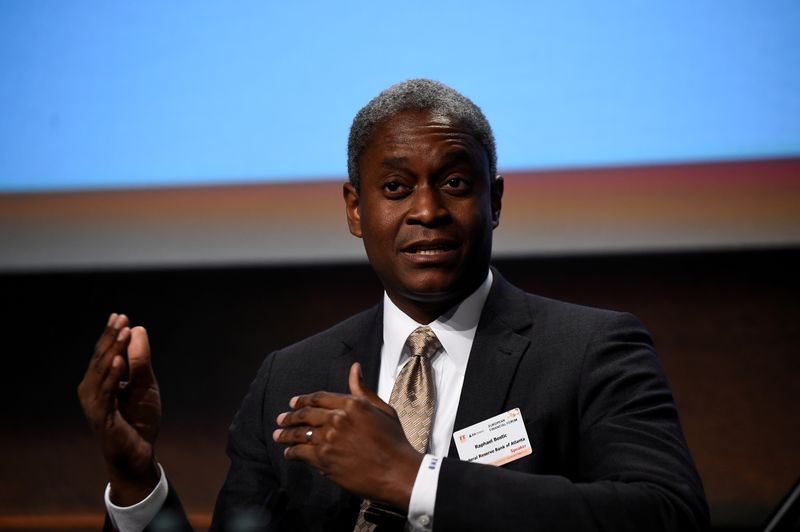 (Reuters) -U.S. inflation is above the Federal Reserve's 2% inflation target and policymakers need to watch carefully to ensure that pandemic-induced pressures do not cause long-term inflation expectations to become unanchored, Atlanta Fed Bank President Raphael Bostic said on Tuesday.

Bostic said he believes that many of the pricing trends caused by the pandemic will "unwind by themselves," but he cautioned that some of the supply chain disruptions may last longer than initially expected.

"Up to now, indicators do not suggest that long-run inflation expectations are dangerously untethered," he said during a virtual event organized by the Peterson Institute for International Economics. "But the episodic pressures could grind on long enough to unanchor expectations."

Bostic, who has a vote in the Fed's policy-setting committee this year, said he and his staff will stop referring to inflationary pressures as "transitory." He said he thinks inflation is above the Fed's 2% target and is likely to remain above 2% "going forward."

The policymaker said it is time for the Fed to start withdrawing the support it offered to the economy during the pandemic. "I believe the conditions I've described argue for a removal of the Committeeâs emergency monetary policy stance, starting with the reduction of monthly asset purchases, as we discussed in last monthâs meeting," he said.

Bostic spoke after a separate report released by the New York Fed on Tuesday showed that U.S. consumers' near-term and medium-term inflation expectations increased https://www.reuters.com/world/us/us-consumers-inflation-expectations-remain-elevated-ny-fed-survey-finds-2021-10-12 again in September to new highs for the survey, which was launched in 2013. However, long-term inflation expectations remain well anchored https://libertystreeteconomics.newyorkfed.org/2021/09/have-consumers-long-run-inflation-expectations-become-un-anchored when compared to before the pandemic, according to a blog post published last month by the New York Fed.