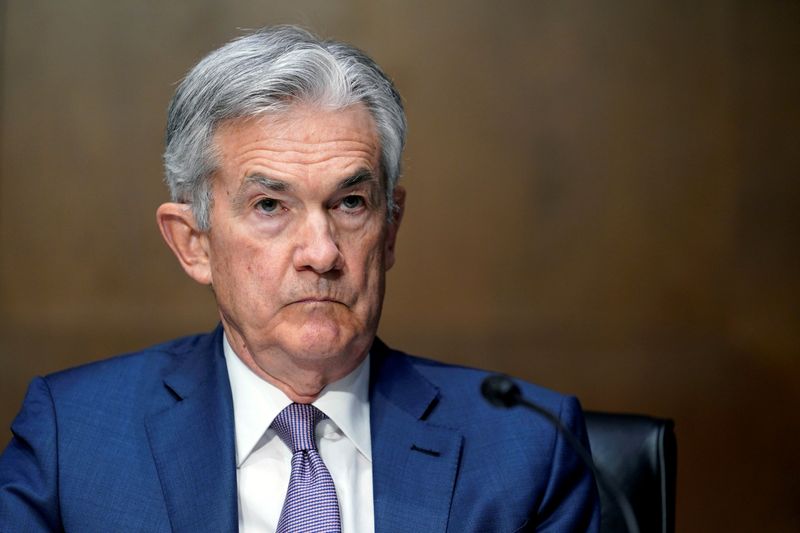 WASHINGTON (Reuters) -Top Federal Reserve officials continued a barnstorming effort on Thursday to tell investors and the public at large that the U.S. central bank's expansive support for the economy will stay in place until an accelerating recovery reaches all levels of American society and is effectively complete.

The Fed since August has been tuning its formal, technical language to make that point, but policymakers this week framed those promises in more colloquial terms and did so in interviews with more widely broadcast media than the financial outlets policymakers usually rely on.

In an interview with National Public Radio's "Morning Edition" program on Thursday, Fed Chair Jerome Powell said that even with the economy rebounding faster than expected, any change in monetary policy would happen "very, very gradually over time and with great transparency, when the economy has all but fully recovered."

Fed Vice Chair Richard Clarida, speaking to the Institute of International Finance, said the central bank will stay in the game until the recovery is "well and truly complete."Earlier in the week, "patience" was the byword used separately by Fed Governor Lael Brainard and San Francisco Fed President Mary Daly as to how the Fed would address economic recovery.

"We are not going to take this punch bowl away," Daly said.

If the message seems insistent, Atlanta Fed President Raphael Bostic said Thursday to reporters, it's because officials don't want any misunderstanding about their plans to support economic progress.

"We are in a transitional period right now, and I think it is important we prevent that sort of speculation from potentially undermining the momentum that we have built," Bostic said. Earlier, in prepared remarks, Bostic said he "unambiguously" did not think Fed policy should change soon, even though he has penciled in an interest rate increase in 2023, sooner than most of his colleagues.

"That is still nearly two years from now," he said.

The Fed's loose-for-a-long-time message comes at a moment when the U.S. economy could grow at its highest annual rate since 1984. While that represents a stunning comeback from fears of an economic depression triggered by the pandemic a year ago, it is raising concerns of too much of a good thing -- with the risk of too-high inflation or a financial bubble lurking and a suspicion the Fed may have to react eventually with higher interest rates.

The job market may finally be gaining traction - new claims for unemployment fell by about 100,000 for the week ending March 20 - and Clarida said there may be a return to full employment in a "relatively rapid" fashion. Fed officials have all but guaranteed higher inflation this year.

The prospect of rising inflation has prompted contrarian views from some investors betting the Fed will have to raise interest rates sooner than expected as a way to curb inflation by discouraging investment and spending.

And on Capitol Hill this week, Powell was peppered with questions from Republican lawmakers about whether the Fed risked losing control of inflation or financial markets by leaving interest rates low even as a boom develops, not to mention continuing to pump $120 billion into the financial system each month with bond purchases.

The answer, so far, is that guesses about where the economy might head after such a tortured year won't substitute for seeing it happen on the ground so that the United States can continue to claw back lost jobs and output.

Richmond Fed President Thomas Barkin said in an interview with Reuters on Wednesday that the United States may well see economic growth remain above trend for several years given the pent-up demand that has accumulated during the pandemic and the amount of savings people have amassed.

But in terms of any change in Fed policy, "what matters is what outcomes we actually get," Barkin said. "I am going to see where we go. I am not trying to overthink the date (of any policy change). I am trying to think about the outcome."

Chicago Fed President Charles Evans made similar comments on Wednesday about not pulling back just because the economy seems to be healing.

"We are not just going to backtrack if we hope, and have a forecast, that we are close," he said.

(Reporting by Howard SchneiderEditing by Paul Simao and Leslie Adler)