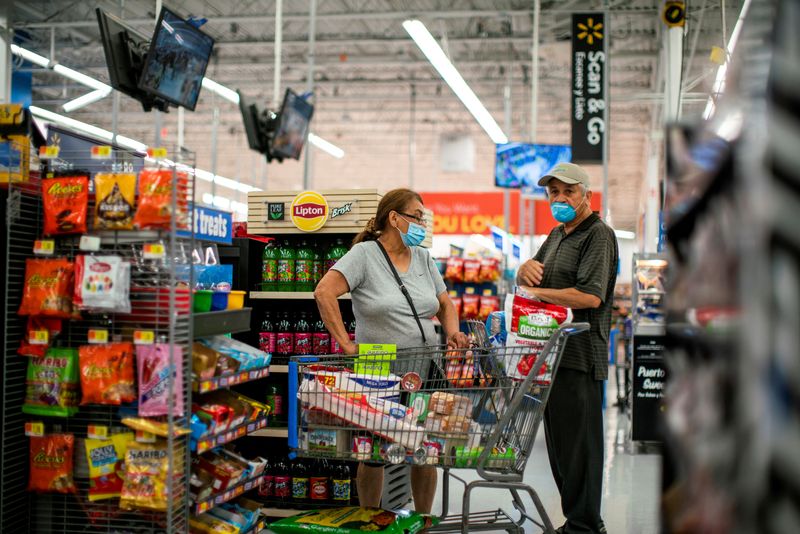 By Ann Saphir and Howard Schneider

(Reuters) - Evidence U.S. inflation is cooling will not budge Federal Reserve policymakers from half-point interest rate hikes planned for upcoming meetings in June and July, but may prompt a shift to smaller rate hikes come September if the trend continues.

That is still more than three times the Fed's 2% target.

While prices are still rising, the pace of the rise has slowed versus the previous month. April's PCE reading marked the first deceleration in the measure since November 2020.

The core PCE index, which strips out food and energy prices to give a clearer read of more persistent price pressures, rose 4.9% - again, far too high for comfort, but marking a second straight month of moderation from what may have been a peak in February of 5.3%.

"While inflation levels in the 4% range are still too high for the Fed, we are seeing movement in the right direction," Nationwide Economist Dan Hadden wrote in a note. As long as inflation continues to stabilize or moderate, "it will likely give the (Fed) more flexibility later this year.â

The Fed has lifted interest rates three-quarters of a percentage point so far this year, and most policymakers expect to deliver a couple more half-a-percentage-point rate hikes, recent public comments and a record of their May meeting show.

That would bring overnight bank-to-bank borrowing costs to a range of 1.75%-2% by the end of July. Anticipation of those rate hikes already appears to be taking a bite out of demand in the housing market, where prices have soared but sharp increases in mortgage rates helped push down home sales for a sixth straight month in April.

That softening suggests price increases will also moderate in months ahead and, says Comerica's Bill Adams, will start to show up in slower inflation readings late this year or in early 2023.

Already at the Fed's May meeting, âa number" of policymakers thought "monthly data might suggest that overall price pressures may no longer be worsening.â

The broad hope at the Fed is to get through this era of price shocks and uncertainty with, at worst, a slowdown in the pace of growth, rather than an out-and-out recession that causes a dramatic rise in unemployment.

"Amid rising pessimism about the state of the US consumer, today's report provides some reassurance that the main pillar of the economy is still standing strong in the face of historic inflation and rising borrowing costs," Oxford Economics' Lydia Boussour wrote on Friday.

U.S. equity markets, which have fallen fast in recent weeks as investors took stock of how the Fed's monetary shift might slow the economy, rose on Friday following the inflation data and hope that the Fed's quest for a "soft landing" might still be in reach.

Traders of futures contracts tied to the Fed's policy rate kept bets that the central bank will downshift to quarter-point rate hikes in September.

For that to come to pass the rest of the world will need to cooperate.

The impact of the Ukraine war on world commodity prices and the ongoing coronavirus lockdowns in China are two major risks fully beyond the Fedâs control.

Fed policymakers also say they are watching inflation expectations closely for signs that current high inflation are getting entrenched into American household and business psychology. Recent data suggests those risks too are at the least not getting worse.

Fed staff, meanwhile, continue to see headline PCE inflation moderating to 4.3% by the end of the year and to 2.5% by the end of next year as a âhistorically largeâ tightening of financial conditions was felt throughout the economy, the Fed meeting minutes this week showed.

(Reporting by Ann Saphir in Berkeley, Calif., Howard Schneider in Washington and Lindsay Dunsmuir in Scotland; Editing by Matthew Lewis)