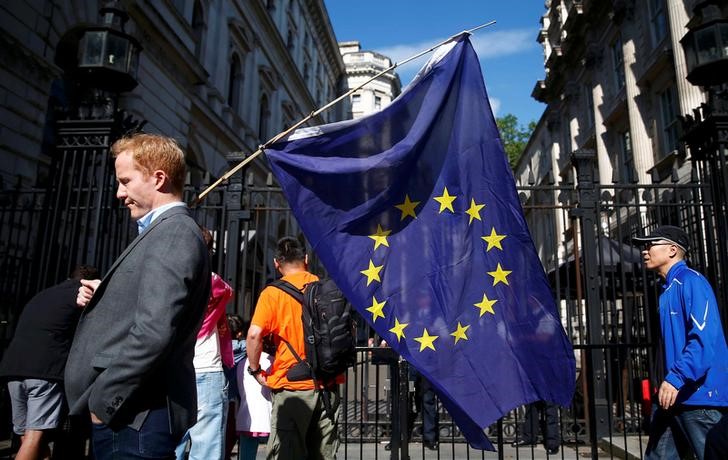 A man carries an EU flag after Britain voted to leave the European Union, outside Downing Street in London. REUTERS/Neil Hall

The People's Bank of China has already made "appropriate contingency plans" in connection with the British vote, it said in an online statement.

"We will continue to implement prudent monetary policy, use various policy tools to maintain reasonable and adequate liquidity and maintain financial stability," it said.

Some of the world's biggest central banks offered financial backstops to soothe plunging markets after Britain voted to leave the EU, with some even intervening in currency markets on worries that volatility could hit growth.

Analysts said the Brexit shock could increase pressure on the central bank to ease policy, even as the government is relying more on fiscal spending and tax cuts to underpin growth.

"But the chances of cutting interest rates are not high."

The economy grew 6.7 percent in the first quarter - the weakest pace since the global financial crisis.

The central bank has cut interest rates six times since November 2014 and reduced the amount of cash that banks must set aside as reserves.

The PBOC also pledged to keep the yuan basically stable and will further improve the market-based yuan mechanism. It has long pledged to let market forces play a bigger role in setting yuan exchange rate.

The yuan slumped to more than 5-year lows on Friday, prompting the central bank to intervene, as turmoil swept global markets in the wake of Britain's vote.