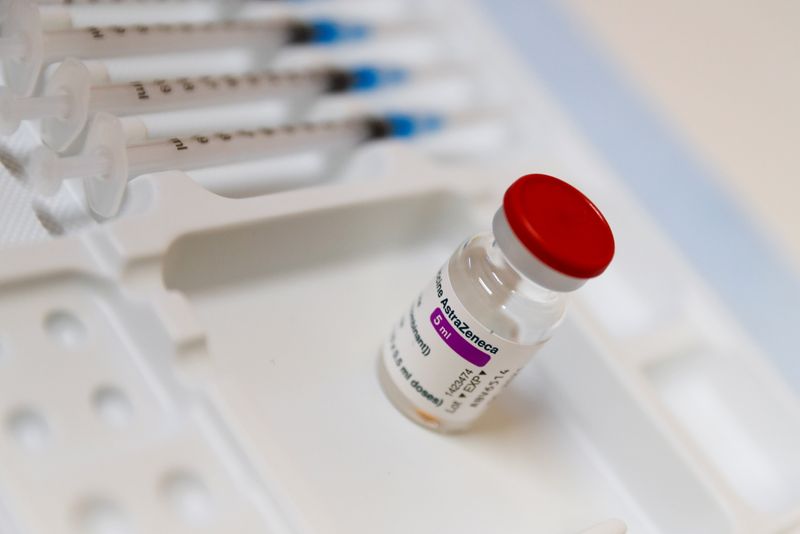 By Miyoung Kim and Caroline Copley

SINGAPORE (Reuters) - AstraZeneca may have released outdated information on its latest COVID-19 vaccine trial, giving an "incomplete" picture of its efficacy, a leading U.S. health agency said on Tuesday, casting doubt on the shot's potential U.S. rollout and plunging its developers, once again, into controversy.

The surprise public rebuke from federal health officials comes just one day after interim data from the drugmaker showed better-than-expected results from the U.S. trial. That had been seen as a scientific counter to concerns that have dogged the shot over its effectiveness and possible side effects.

The vaccine, developed with Oxford University, was 79% effective in preventing symptomatic illness in the large trial that also took place in Chile and Peru, according to the data. It was also 100% effective against severe or critical forms of the disease and hospitalisation, and posed no increased risk of blood clots.

The Data Safety Monitoring Board (DSMB), an independent committee overseeing the trial, has "expressed concern that AstraZeneca may have included outdated information from that trial, which may have provided an incomplete view of the efficacy data," the U.S. National Institute of Allergy and Infectious Diseases (NIAID) said in a statement https://bit.ly/3scE3ji released after midnight in the United States.

"We urge the company to work with the DSMB to review the efficacy data and ensure the most accurate, up-to-date efficacy data be made public as quickly as possible," it said, adding that the DSMB had informed AstraZeneca of its concerns.

AstraZeneca did not immediately respond to a Reuters request for comment.

Its shares were down 1.2% in midmorning trade.

The statement raises fresh questions about the vaccine's efficacy as it is being administered in dozens of countries worldwide and clouds the timeline for its emergency use authorization in the United States.

"This is indeed an extraordinary act. The negative reports about this vaccine do not stop, although my assessment is that it is well tolerated and safe, but clearly less effective than the two mRNA vaccines," Peter Kremsner, from the University Hospital in Tuebingen, Germany.

Rival vaccines from Pfizer and Moderna that use so-called mRNA technology produced efficacy rates of around 95% each, far above the 50% benchmark set by global regulators.

The DSMB is organised by NIAID, and its role is to provide study oversight and evaluate clinical data to ensure safe and ethical conduct of the study. NIAID is headed by U.S. infectious diseases expert Anthony Fauci and is part of the National Institutes of Health.

"DSMB externalisations of concerns are deeply unusual for multinational pharma companies and suggest an extraordinary high level of friction between the DSMB and the sponsor," Citi analysts said in a note.

Hailed as a milestone in the fight against the COVID-19 pandemic when it first emerged as a vaccine contender, the AstraZeneca shot has faced questions since late last year when the drugmaker and Oxford University published data with different efficacy readings due to a measurement error.

Later analysis suggested the dosing interval rather than the amount of dose administered was responsible for the difference.

Confidence in the vaccine took a further hit this month when more than a dozen countries, mostly in Europe, temporarily suspended the shot after reports linked it to a rare blood clotting disorder in a very small number of people.

The European Union's drug regulator said last week it was safe but an opinion poll on Monday showed Europeans remained sceptical about its safety.

Fauci, who also serves as chief medical advisor to U.S. President Joe Biden, said on Monday the U.S. trial found no indication at all of the rare blood clots and the statement from the NIAID didn't raise questions about the trial's findings regarding blood clotting.

The latest data, which has yet to be reviewed by independent researchers, was based on 141 infections among 32,449 participants.

Analysts had noted AstraZeneca's achievement of producing strong trial data against a backdrop of more infectious variants spreading in the United States and other countries.

Stephen Evans, a pharmacoepidemiology professor at London School of Hygiene & Tropical Medicine, said the up-to-date data request may have to do with efficacy readings from recent infections which may include new variants and thus lower protection rates.

"The other vaccines may also show such reduced efficacy and we donât know by how much. It does not leave me concerned particularly unless they had found a safety issue that was being hidden, which does not appear to be the case."

The AstraZeneca vaccine is seen as crucial in tackling the spread of COVID-19 across the globe because it is easier and cheaper to transport than rival shots.

It has been granted conditional marketing or emergency use authorization in more than 70 countries. Many countries are relying heavily on it to end the pandemic, and several state leaders have taken the shot to boost confidence in the vaccine including South Korea's President Moon Jae-in who received it on Tuesday.

(Reporting by Miyoung Kim in Singapore; Additional reporting by Shubham Kalia in Bengaluru, Ludwig Burger in Frankfurt and Kate Kelland in London; Editing by Edwina Gibbs and Josephine Mason)