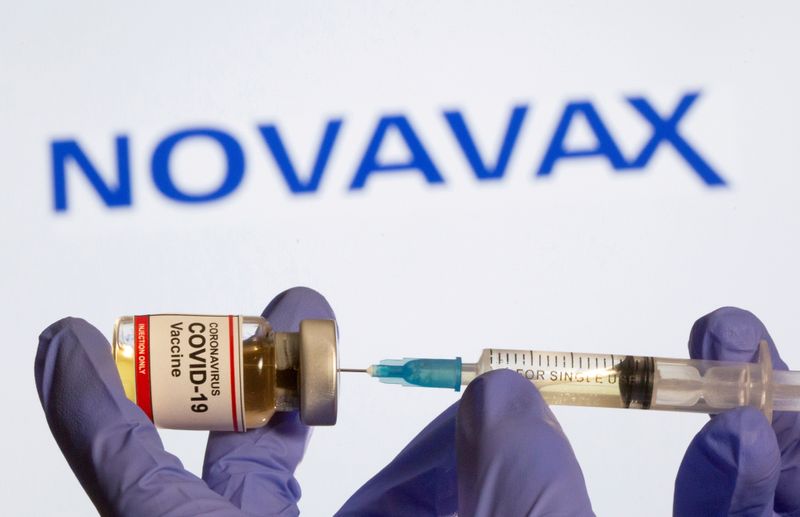 FILE PHOTO: A woman holds a small bottle labeled with a "Coronavirus COVID-19 Vaccine" sticker and a medical syringe in front of displayed Novavax logo in this illustration taken, October 30, 2020. REUTERS/Dado Ruvic/File Photo

By Francesco Guarascio and Carl O'Donnell

BRUSSELS (Reuters) - Novavax is delaying signing a contract to supply its COVID-19 vaccine to the European Union, an EU official involved in the talks told Reuters, as the U.S. biotech company warned it was struggling to source some raw materials.

Prolonging the talks might further complicate the EU's vaccination plans as the bloc had planned to sign a deal early this year for at least 100 million doses of Novavax's vaccine, with an option for another 100 million.

The EU official, who asked not to named as the talks are confidential, said the company had postponed signing a deal for weeks, citing legal issues in meetings with the bloc's vaccine negotiators.

"They are slowing down the process of finishing the contract," the official, who attended the meetings, told Reuters.

Informally, a Novavax executive had said a slow pace in negotiations was warranted because the company was having production problems, the EU official said.

A Novavax spokeswoman said in an email that talks with the EU over a supply deal continue, but declined to say more about the discussions.

She said the company was working "through some pandemic-related raw materials supply shortages", without giving details.

The European Commission, which coordinates talks with vaccine makers, declined to comment.

Facing supply problems from other COVID-19 vaccine makers, notably AstraZeneca, the EU's immunisation campaign is lagging far behind those in the United States and Britain, a situation that has become more critical as a third wave of infections sweeps the bloc.

Novavax is planning to produce key components of its two-dose vaccines for the EU in several of its factories, it said, including one in the Czech Republic, which makes antigens, the inactivated organisms that trigger an immune response.

The EU official said production capacity at the plant, the only one in the EU, was too small the meet the needs of the 27-nation bloc.

Novavax has eight manufacturing locations, including the Serum Institute of India, the world's biggest vaccine maker.

Serum warned earlier this month that a temporary U.S. ban on exports of critical raw materials could hurt its production of vaccines, including Novavax's.

Serum is also making AstraZeneca's COVID-19 vaccine and has suspended major exports of the shot.

It's not clear if Serum's issues are affecting Novavax's potential supplies to the EU.

Novavax executives said in an investor call earlier this month its vaccine production plants should all be fully functional by April.

CEO Stanley Erck told Reuters on March 1 the company expected to have tens of millions of doses stockpiled and ready to ship in the United States when it receives regulatory approval there, possibly in May.

Novavax concluded exploratory talks with the EU in mid-December, a step that has usually been followed by the signature of a contract within two or three months, according to EU deals with other COVID-19 vaccine makers.

At a meeting in mid-February, the Commission told EU ambassadors a deal with Novavax was likely to be finalised in a week, an official who attended that meeting said. A second EU official, involved in talks with the firm, also said in February that a deal was close.

But the same official told Reuters on Thursday that talks were ongoing and the company was now saying it aimed for a deal by June, although the official added the timeline was not clear.

Novavax says it is working towards submitting an application for regulatory approval in the EU in the second quarter.

Regulatory approval is a precondition for a vaccine to be rolled out in the bloc, but its absence has not prevented the EU from signing vaccine supply deals.

All EU supply contracts have so far been signed before regulatory approval, with the EU usually making upfront payments to companies and agreeing the full price for vaccines would only be paid after regulatory authorisation.

Novavax's vaccine has been assessed by the EU drugs regulator under a rolling review since early February.

Earlier in March, Novavax said its vaccine was highly effective in a late-stage trial in the United Kingdom.