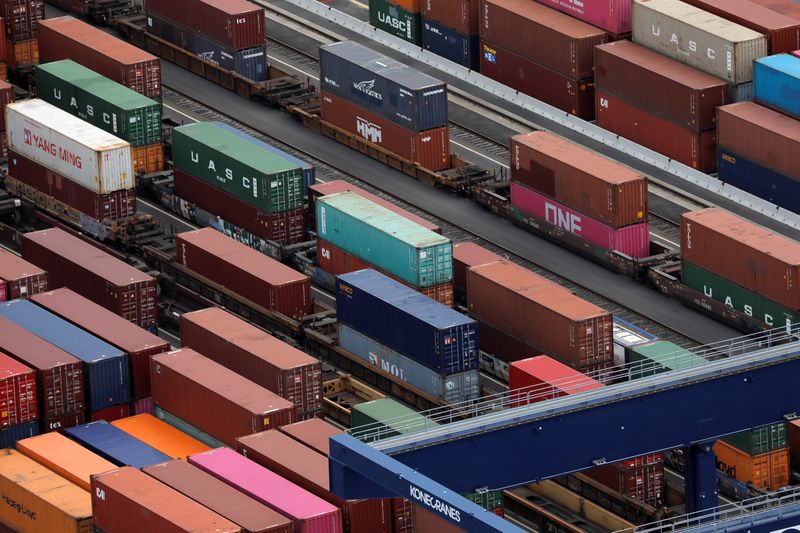 WASHINGTON (Reuters) - U.S. services industry activity nudged up in September, but growth is being restrained by a persistent shortage of inputs and the resulting high prices as the pandemic drags on.

The Institute for Supply Management (ISM) survey on Tuesday reported that "ongoing challenges with labor resources, logistics, and materials are affecting the continuity of supply." Hopes for an easing in the supply chain bottlenecks were dashed by a resurgence in COVID-19 infections over summer, driven by the Delta variant. Ports in China and the United States are also experiencing congestion.

The ISM's non-manufacturing activity index edged up to a reading of 61.9 last month from 61.7 in August. A reading above 50 indicates growth in the services sector, which accounts for more than two-thirds of U.S. economic activity. Economists polled by Reuters had forecast the index falling to 60.

In the public administration industry, businesses complained about rising costs for both supply and service inputs, which they said "have the potential to significantly impact our operations through the end of the year, especially if seasonal trends prove exceptionally strong."

Spending is shifting from goods to services like travel and other high-contact activities as the economy normalizes after being severely disrupted by the pandemic, thanks to vaccinations against the coronavirus.

That mirrored the findings of the ISM's manufacturing survey published last Friday and suggested that high inflation could persist through 2022. The Federal Reserve last month raised its projection for its key inflation measure to 3.7% this year. That was up from the 3.0% projected in June.

Stocks on Wall Street were trading higher. The dollar rose against a basket of currencies. U.S. Treasury prices fell.

But even as the services industry pushes ahead, evidence is mounting that economic growth slowed significantly in the third quarter. A separate report from the Commerce Department on Tuesday showed the trade deficit surged 4.2% to a record $73.3 billion in August. Economists had forecast the trade gap widening to $70.5 billion.

The report followed on the heels of government data last Friday showing high inflation sharply cutting into consumer spending in July, with a moderate rebound in August.

Following the trade data, the Atlanta Fed cut its third-quarter gross domestic product estimate to a 1.3% annualized rate from a 2.3% pace.

The economy grew at a 6.7% pace in the second quarter. Trade has subtracted from GDP growth for four straight quarters.

Imports shot up 1.4% to a record high $287.0 billion, led by consumer goods such as pharmaceutical preparations, toys, games and sporting goods. There was also a rise in imports of industrial supplies and materials.

But a global shortage of semiconductors which is hampering production at auto plants resulted in imports of motor vehicles, parts and engines decreasing $1.5 billion.

"There is a huge backlog of foreign-made consumer goods waiting to get into the U.S. supply chain, on ships waiting to be unloaded at U.S. ports, at foreign ports waiting to get onto those ships, and at foreign factories waiting to get to port," said Bill Adams, a senior economist at PNC Financial in Pittsburgh, Pennsylvania. "That will keep goods imports high through at least November."

Exports gained 0.5% to $213.7 billion in August, the highest since May 2019, lifted by industrial supplies and materials such as nonmonetary gold and natural gas. But motor vehicles exports fell as did capital goods like civilian aircraft and industrial machinery.

Companies complained about "employee flight to better-paying jobs and lack of a pipeline to replace." The ISM survey also found that "labor shortages (were) experienced at all levels."

The survey's measure of services industry employment dipped to a reading of 53.0 last month from 53.7 in August.

There is an acute shortage of labor as the pandemic forced some people to drop out of work to become caregivers. Others are reluctant to return for fear of contracting the virus, while some have either retired or are seeking career changes. There were a record 10.9 million job openings at the end of July.