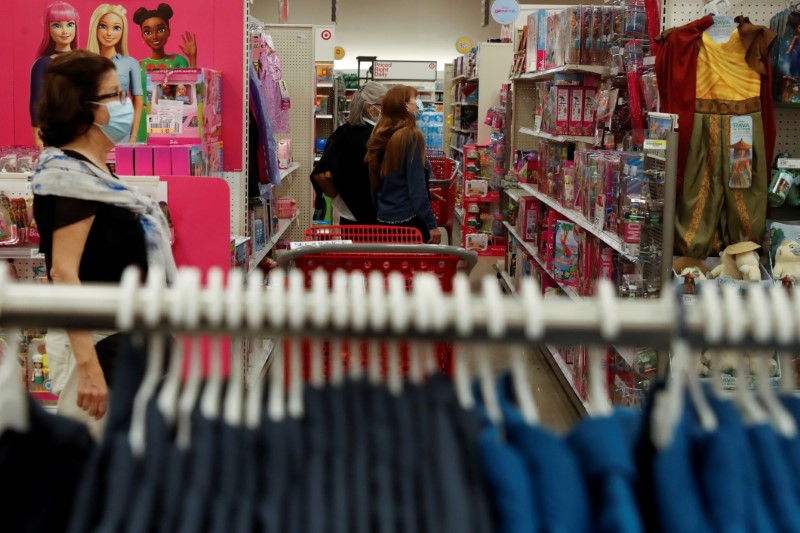 WASHINGTON (Reuters) - U.S. retail sales dropped more than expected in May, with spending rotating back to services from goods as vaccinations allow Americans to travel and engage in other activities that had been restricted by the COVID-19 pandemic.

Despite last month's decline reported by the Commerce Department on Tuesday, the trend in retail sales remains strong. Sales in April were revised sharply up and are well above their pre-pandemic level, keeping intact expectations of double-digit growth in both consumer spending and the economy this quarter.

"The days of spending money online and splurging on durable goods and home furnishings is pivoting toward getting ready for trips to see grandma and grandpa at the lake or the beach and evenings out reconnecting with friends at bars and restaurants," said Tim Quinlan, a senior economist at Wells Fargo in Charlotte, North Carolina.

Retail sales surged 28.1% on a year-on-year basis. The retail sales report mostly capture spending on goods, with restaurants and bars the only services category included.

During the pandemic, demand shifted to goods like electronics and motor vehicles as millions of people worked from home, switched to online classes and avoided public transportation. More than half of eligible Americans are fully vaccinated, boosting demand for air travel, hotel accommodation, dining out and entertainment among other activities.

May's decline in retail sales was also due to a drop in receipts at auto dealerships, reflecting tight supply as a global semiconductor shortage hampers motor vehicle production.

They were previously estimated to have decreased 1.5% in April. Services such as healthcare, education, travel and hotel accommodation make up the other component of consumer spending.

U.S. stocks were lower. The dollar was steady against a basket of currencies. U.S. Treasury prices fell.

Vaccinations have allowed for a broader reopening of the economy. But the resulting demand, which is also being fired up by trillions of dollars from the government and record-low interest rates, is straining supply chains, fanning inflation.

In a separate report on Tuesday, the Labor Department said its producer price index for final demand increased 0.8% last month after rising 0.6% in April. In the 12 months through May, the PPI accelerated 6.6%, the largest gain since November 2010, after advancing 6.2% in April.

The report followed news last week that consumer prices rose solidly in May, leading to the biggest annual increase in inflation in nearly 13 years.

With the PPI and CPI data in hand, economists are forecasting that the Federal Reserve's preferred inflation measure, the core personal consumption expenditures price index, rose at least 0.4% in May. That would push the year-on-year rate to about 3.4% from 3.1% in April. The U.S. central bank has a flexible 2% target.

Fed Chair Jerome Powell has repeatedly stated that higher inflation will be transitory. With the economy reopening, prices are rising back to normal levels in areas hardest hit by the virus. Last spring's weak readings are also dropping out from the calculation.

Fed officials started a two-day policy meeting on Tuesday and were expected to keep the overnight benchmark interest rate near zero. The Fed is pumping money into the economy through bond purchases. Economists will, however, be watching to see if the Fed opens discussion about when and how it will withdraw some of the support to the economy.

"Inflationary pressures are strong in the U.S. right now but should cool in the second half of the year," said Bill Adams, an economist at PNC Financial in Pittsburgh, Pennsylvania. "The Fed is expected to reiterate tomorrow that more progress toward a recovery is needed before they slow their bond purchases."

There was some encouraging news on the supply bottlenecks, with a third report from the Fed showing production at factories increased 0.9% in May as motor vehicle assemblies jumped about 1 million units, though they remain below their average level in the second half of 2020.

Surging prices for used cars and trucks have been one of the main drivers of inflation. Some easing of the supply squeeze could help to slow inflation and support retail sales.

Goods account for about 41% of consumer spending. Even with the boost from stimulus checks fading, consumption could get a powerful tailwind from the at least $2.3 trillion in excess savings amassed by households during the pandemic.

Wages are rising and some households will from July through December receive income under the expanded Child Care Tax Credit program, which will soften the blow of an early termination of government-funded unemployment benefits in at least 25 states.

"By our estimate, this program should provide approximately $16.7 billion in additional income per month in the second half of this year, for a total of $100 billion," said Stephen Juneau, a U.S. economist at Bank of America Securities in New York.