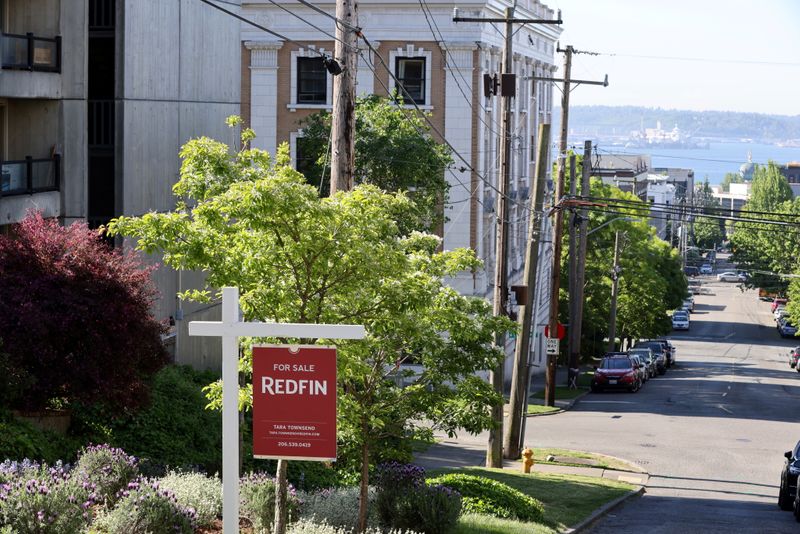 FILE PHOTO: A "For Sale" sign is posted outside a residential home in the Queen Anne neighborhood of Seattle, Washington, U.S. May 14, 2021. REUTERS/Karen Ducey/File Photo

(Reuters) - The number of applications for U.S. home mortgages declined last week, driven by a decrease in both refinancing and purchase activity as mortgage rates rose.

The Mortgage Bankers Association (MBA) said on Wednesday its seasonally adjusted market index fell 4.0% in the week ended July 16 from a week earlier. That reflected a 2.8% decrease in applications to refinance existing loans, while purchase applications declined 6.4% to their lowest level since May 2020.

"Limited inventory and higher prices are keeping some prospective homebuyers out of the market," Joel Kan, MBA's associate vice president of economic and industry forecasting, said in a statement.

"Refinance activity fell over the week, but because rates have stayed relatively low, the pace of applications was close to its highest level since early May 2021," the statement added.

This week's data comes just one day after the Commerce Department reported housing starts accelerated in June, while building permits dropped to an eight-month low.

Also, U.S. homebuilder confidence fell to an 11-month low in July, driven by shortages in both supply and labor.

"While construction companies work to balance lumber costs returning to earth with increases in labor and development costs, the market shortage of about 4.0 million homes remains an obstacle yet to overcome," said George Ratiu, senior economist at Realtor.com.

"Millions of buyers are eager and able to buy, if only they can find the right home at an affordable price."