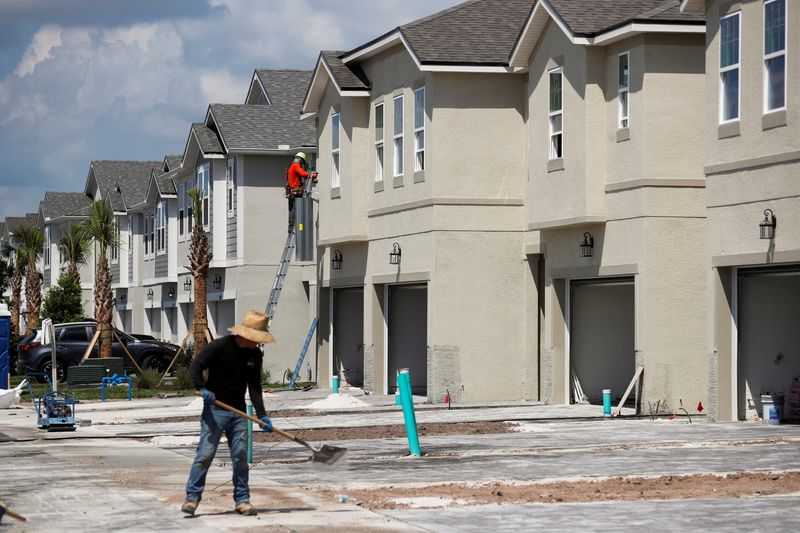 FILE PHOTO: A carpenter works on building new townhomes that are still under construction while building material supplies are in high demand in Tampa, Florida, U.S., May 5, 2021. REUTERS/Octavio Jones

WASHINGTON (Reuters) - U.S. single-family homebuilding fell for a second straight month in August as builders continued to struggle with shortages of materials and labor, suggesting the housing market could remain a drag on economic growth in the third quarter.

The report from the Commerce Department on Tuesday also showed the number of houses authorized for construction but not yet started raced to a record high last month, a sign of reluctance by builders to take on new projects.

Builders' inability to ramp up the production of single-family homes amid a massive housing shortage is driving up prices and keeping some first-time buyers from the market.

"While lumber prices have plummeted in the spot market, those lower prices have not yet made their way to home builders," said Mark Vitner, a senior economist at Wells Fargo in Charlotte, North Carolina. "Moreover, other essential building materials remain in short supply, including windows, cabinets, electric breaker boxes and wedge anchors."

Single-family starts, which account for the largest share of the housing market, dropped 2.8% to a seasonally adjusted annual rate of 1.076 million units last month. The decline was, however, offset by a surge in starts for the volatile multi-family segment.

Single-family starts dropped in the West and Midwest. They rose in the Northeast and the densely populated South.

Building costs remain an issue even though lumber futures have tumbled from a record high of $1,711 per thousand board feet in May to about $604 in Tuesday morning trade.

Single-family homebuilding has struggled to gain traction since surging to a rate of 1.255 million units in March, which was the highest level since November 2006.

Starts for buildings with five units or more soared 21.6% to a rate of 530,000 units last month, the highest level since January 2020. The multi-family housing segment is being boosted by demand for rentals as COVID-19 vaccinations allow companies to recall workers to offices in city centers.

Early in the coronavirus pandemic, there was an exodus from cities as people worked from home and took classes online, fueling demand for bigger homes in the suburbs and other low-density areas. While the pandemic tailwind is fading, demand for housing remains strong thanks to near record low mortgage rates and rising wages from a tightening labor market.

Though the Federal Reserve is expected at the end of a two-day policy meeting on Wednesday to clear the way to trimming its monthly bond purchases later this year, that will likely have a limited impact on mortgage rates. The U.S. central is expected to keep its benchmark overnight interest rate near zero for a while.

A survey from the National Association of Home Builders on Monday showed confidence among single-family homebuilders edged up from a 13-month low in September, but it noted that "delivery times remain extended and the chronic construction labor shortage is expected to persist."

Stocks on Wall Street rose as investors weighed the risk of contagion from debt-saddled Chinese developer Evergrande. The dollar dipped against a basket of currencies. U.S. Treasury prices were mixed.

Residential investment contracted in the second quarter after three straight quarters of double-digit growth. A further decline this quarter is likely.

"We conjecture that this strength in multi-family may be a response to the strong increase in asking rents and the low vacancy rates in rental units," said Conrad DeQuadros, senior economic advisor at Brean Capital in New York.

The inventory of previously owned homes is near record lows, leading to record double-digit annual growth in home prices.

Realtors estimate that single-family housing starts and completion rates need to be in a range of 1.5 million to 1.6 million units per month to close the inventory gap.

The stock of housing under construction increased 1.7% to a rate of 1.404 million units last month.

"Supply issues will constrain production for some time yet and we expect single-family starts will see only a gradual rise from here, reaching 1.16 million annualized by end-2021," said Matthew Pointon, a senior property economist at Capital Economics in New York.