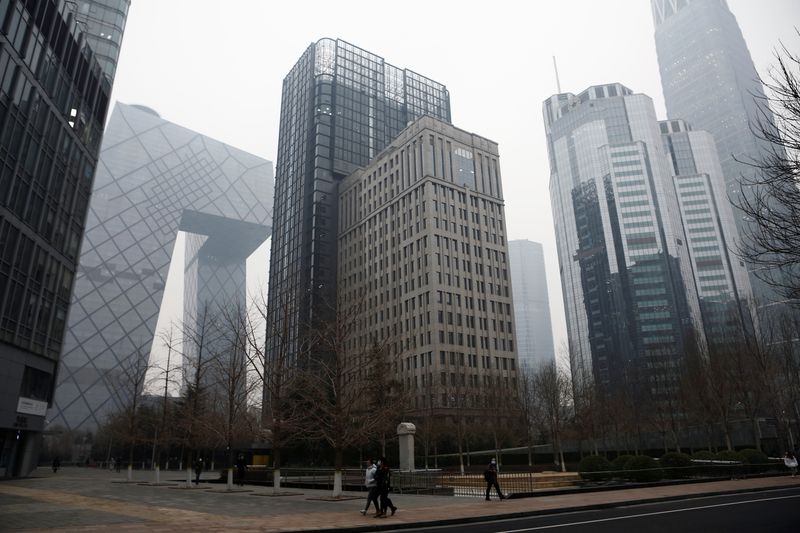 By Kevin Yao and Gabriel Crossley

BEIJING (Reuters) -China's economy grew slightly more slowly than expected in the second quarter, weighed down by higher raw material costs and new COVID-19 outbreaks, as expectations build that policymakers may have to do more to support the recovery.

Gross domestic product (GDP) expanded 7.9% in the April-June quarter from a year earlier, official data showed on Thursday, missing expectations for a rise of 8.1% in a Reuters poll of economists.

Growth slowed significantly from a record 18.3% expansion in the January-March period, when the year-on-year growth rate was heavily skewed by the COVID-induced slump in the first quarter of 2020.

"The numbers were marginally below our expectation and the market's expectation (but) I think the momentum is fairly strong," said UOB economist Woei Chen Ho in Singapore.

"Our greater concern is the uneven recovery that we've seen so far and for China the recovery in domestic consumption is very important...retail sales this month was fairly strong and that may allay some concerns."

While the world's second-largest economy has rebounded strongly from the COVID-19 crisis, buoyed by solid export demand and policy support, data releases in recent months have suggested some loss in momentum.

Investors are watching to see if the central bank is shifting to an easier policy stance after the People's Bank of China (PBOC) announced last week it would cut the amount of cash that banks must hold as reserves, just as some other central banks begin or start thinking about exiting pandemic-era stimulus.

Average second quarter growth in 2020 and 2021 was 5.5%, up slightly from a 5% average for the first quarter, according to the National Bureau of Statistics.

On a quarterly basis, GDP expanded 1.3% in the April-June period, the NBS said, just beating expectations for a 1.2% rise in the Reuters poll. The NBS revised down growth in the first quarter from the fourth quarter last year to 0.4%.

The PBOC move, which released about 1 trillion yuan ($154.64 billion) in long-term liquidity to bolster the recovery, comes even as policymakers have sought to normalise policy after the economy's strong rebound from the coronavirus crisis to contain financial risks.

It highlights the challenges policymakers will face in rolling back pandemic-era stimulus as the coronavirus continues to flare-up around the world.

"The domestic economic recovery is uneven," said Liu Aihua, an official at the NBS at a briefing on Thursday.

"We must also see that the global epidemic continues to evolve, and there are many external instabilities and uncertain factors," she said.

Premier Li Keqiang reiterated on Monday that China would not resort to flood-like stimulus.

Still, economists in the Reuters poll expected more support this year, forecasting a further cut in the bank reserve requirement ratio (RRR) in the fourth quarter.

Some market watchers say a cut in the country's benchmark loan prime rate may be next, possibly as early as next week.

"Based on the current situation, if policymakers do not act, the GDP figure in Q4 could fall out of the reasonable range as data from last Q4 was shining," said Xing Zhaopeng, senior China strategist at ANZ in Shanghai.

"I expect the government to roll out targeted easing measures."

China's strong exports have been a key support to the country's post-COVID recovery, but a customs official said this week overall trade growth may slow in the second half of 2021, partly reflecting COVID-19 pandemic uncertainties.

"Headwinds to growth are likely to intensify during the second half of the year," said Julian Evans-Pritchard, senior China economist at Capital Economics in a note.

"China's COVID-19 export boom appears to have peaked and will unwind over the coming quarters as vaccine rollouts and reopening help to normalise global consumption patterns."

New home prices rose in June at the slowest clip since April and property investment at its weakest pace this year as government measures to cool a hot housing market further tapped the brakes on growth.

The NBS data showed China's industrial output grew 8.3% in June from a year ago, slowing from a 8.8% rise in May. Economists in the poll had expected a 7.8% year-on-year rise.

Economists in the Reuters poll expected a 8.6% GDP expansion in 2021, which would be the highest annual growth in a decade and well above the country's official target for growth higher than 6%. China was the only major economy to have avoided a contraction last year, expanding 2.3%.