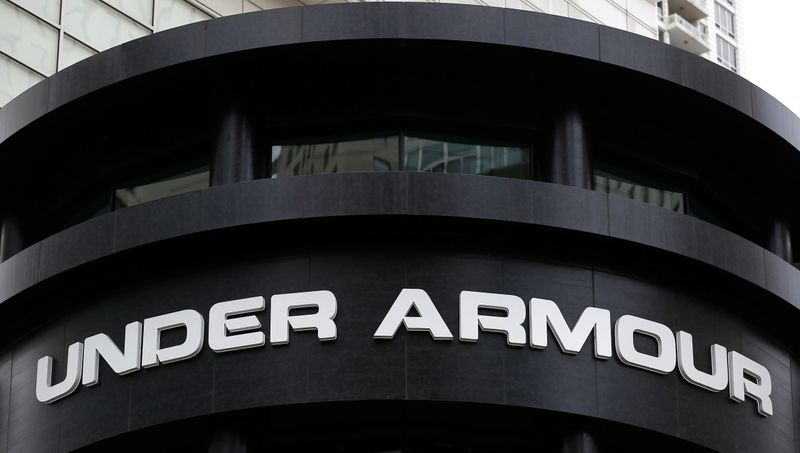 FILE PHOTO: An Under Armour sign is seen outside a store in Chicago, Illinois, U.S., October 25, 2016. REUTERS/Jim Young

(Reuters) -Under Armour Inc raised its expectations for annual profit and sales on Tuesday, after reporting a 35% jump in revenue as the reopening of economies in the United States and Asia fueled demand for the company's sports shoes and apparel.

The rollout of COVID-19 vaccines and new rounds of government stimulus lifted consumer confidence for discretionary spending this year, helping Under Armour post a 32% increase in quarterly revenue from North America.

Under Armour said it would spend more on marketing its brand, stores and website, to take advantage of recovering markets, including North America, China and Germany.

It expects marketing and incentive compensations to make up about three quarters of the increase in costs this year.

Still, the sportswear maker lifted its full-year adjusted earnings per share forecast to between 28 cents and 30 cents, from 12 cents to 14 cents.

It expects full-year revenue to rise by a high-teens percentage, compared with a previous outlook of a high single-digit percentage increase. The company forecast second-quarter revenue to rise about 70% after store closures hammered sales a year ago.

"There are still industry issues to look out for such as issues with ports. It's not that the consumer doesn't want the product but we're seeing issues with getting the product in store," said Jessica Ramirez, retail analyst at Jane Hali & Associates.

Under Armour's first-quarter net revenue rose to $1.26 billion, beating estimates of $1.13 billion, according to IBES data from Refinitiv.

(Reporting by Uday Sampath and Mehr Bedi in Bengaluru;Editing by Vinay Dwivedi and Amy Caren Daniel)