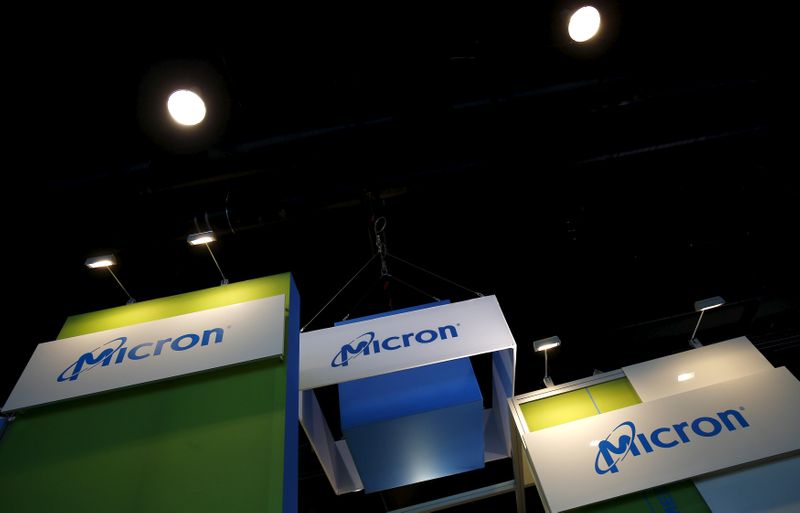 FILE PHOTO: The logo of U.S. memory chip maker MicronTechnology is pictured at their booth at an industrial fair in Frankfurt, Germany, July 14, 2015. REUTERS/Kai Pfaffenbach

By Tiyashi Datta and Stephen Nellis

(Reuters) - Micron Technology Inc on Wednesday forecast fiscal third-quarter revenue above Wall Street estimates due to a rise in demand for memory chips thanks to 5G smartphones and artificial intelligence software that is pushing memory chip prices upward.

The Boise, Idaho-based company, which makes NAND memory chips that serve the data storage market as well as DRAM chips that are widely used in laptops and other computing devices, benefited from the coronavirus pandemic as a global shift to remote work boosted chip demand. Shares were up 2.9% after hours.

On top of that, a global chip shortage has spurred buyers such as personal computer makers to begin snapping up supplies, sending memory chip prices upward. Analyst firm Trendforce said prices for DRAM rose between 3% and 8% in the first calendar quarter and predicts prices will rise between 13% and 18% in the second calendar quarter.

Micron said the overall DRAM chip market is in "severe shortage" and will tighten through the year. Micron itself is still working through a production disruption caused by an earthquake and power outage at one of its DRAM plants in Taiwan in December.

The company also said that a drought in central Taiwan has forced it to secure alternative sources of water for its factory but that it expects no immediate affect on production.

The global chip shortage means that non-memory chips are experiencing shortages forcing makers of cars, PCs and smartphones to produce fewer units than they would like to in order to meet end demand. "We believe memory demand would have been even greater without these shortages," Sanjay Mehrotra, Micron's chief executive officer, said during a conference call with investors.

The chipmaker expects current-quarter revenue to be $7.1 billion, plus or minus $200 million, while analysts on average were expecting $6.79 billion, according to IBES data from Refinitiv.