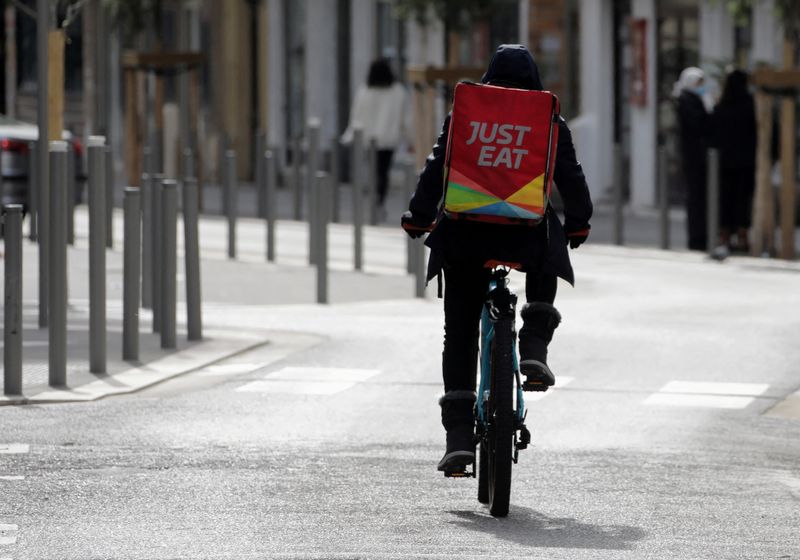 AMSTERDAM (Reuters) -Just Eat Takeaway.com NV, Europe's largest online food ordering and delivery company, said on Tuesday it expected to make an underlying profit in the second half of 2022, sooner than previously forecast.

The company's shares jumped by 10% to 15.74 euros in Amsterdam shortly after the announcement.

Just Eat said in a statement it would have positive earnings before interest, taxes, depreciation and amortisation (EBITDA) for the second half of the year, compared to an equivalent loss of 134 million euros in the same period of 2021.

It had previously guided for a negative margin on the gross transaction value (GTV) on its platform for the full year.

"It seems that Just Eat Takeaway's efforts to cut marketing, central costs, and raise consumer and restaurant fees are bearing fruit much faster than (analysts) were all anticipating," said analyst Clement Genelot of Bryan Garnier in an emailed reaction.

He said the announcement was a positive surprise given an inflation-driven consumer squeeze in Europe "where consumers are massively trading down."

Citi analysts said management's previous guidance had implied a second half loss of up to 75 million euros at the low end of Just Eat's guidance.

Just Eat said it had made "significant progress" in improving revenue per order and cutting delivery and overhead costs, with managers now expecting the company to become profitable "earlier than initially anticipated".

It added that it expected EBITDA to remain positive in 2023.

Just Eat is due to publish a trading update for the third quarter on Oct. 19. The company said it would shortly schedule an extraordinary shareholders meeting to approve the $1.8 billion sale of its stake in Brazil's iFood to tech investor Prosus, as announced in August.