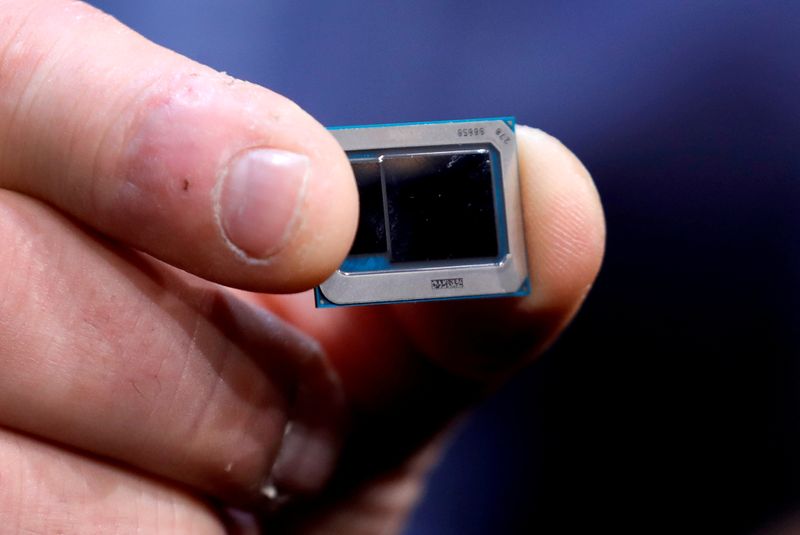 By Stephen Nellis and Chavi Mehta

(Reuters) -Intel Corp on Thursday raised its annual sales outlook on booming demand for personal computers, but its second-quarter profit forecast fell short of analyst expectations as the company spends heavily to get its manufacturing operations back on track and catch up to rivals with faster chips.

Intel shares were down 3.1% to $60.60 in after-hours trading after the results. The company also missed first-quarter expectations in its closely watched data center chip unit.

Intel fumbled new manufacturing technology in recent years, causing it to fall behind rivals such as Advanced Micro Devices Inc and Nvidia Corp in the race to make faster, smaller chips. Patrick Gelsinger, who returned to Intel as its chief executive earlier this year, said the chipmaker has begun to resolve its manufacturing problems, and in March announced a major expansion plan to build new factories in the United States and Europe.

Intel, which is one of the few remaining companies in the processor chip industry that both designs and manufactures its own chips, has said it has been able to beat out rivals during a global chip shortage by operating its own factories. But the company said shortfalls of other third-party components needed to build complete computers could hold back its sales this year.

Intel said its PC chip business had sales of $10.6 billion in the first quarter, ahead of analyst expectations of $10.17 billion, according to data from FactSet.

Gelsinger told Reuters following the release of Intel's earnings that the company exceeded PC chip expectations in part because it was able to finish in its own factories so-called organic substrates, which are materials used to package delicate silicon chips into tougher housings so they can tolerate being put onto circuit boards.

Gelsinger said the changes helped Intel mitigate a global shortage of the substrate materials and "generate millions of units of more supply."

"We were able to satisfy our customer commitments, as we expect that we'll be able to do through the rest of the year," Gelsinger said. "If we are able to gain more leverage in our supply chain, which we have lots of tools to go do, I expect we'll both have beat our guidance for the year and gain more market share for the year."

But Angelo Zino, senior equity analyst at CFRA Research, said he expects PC "momentum to wane" as COVID-19 vaccines roll out around the world and workers return to offices.

The chipmaker forecast second-quarter adjusted revenue and profits of $17.8 billion and $1.05 per share, with sales above analyst estimates of $17.59 billion but profits below estimates $1.09 per share, according to Refinitiv data.

Intel Chief Financial Officer George Davis told Reuters that the lower profits were because the company was investing in ramping up its new 10-nanometer and 7-nanonmeter manufacturing technologies.

But Kinngai Chan, senior research analyst at Summit Insights Group, said Intel's margins are taking a hit in part because it cannot raise prices for new products to recoup manufacturing costs as it did in the past because rivals like AMD have more competitive products.

Demand for both personal computers and cloud computing services from data centers has surged during the pandemic as many businesses shifted to working from home, trends that analysts expect to continue into this year. Intel's data center chip business had $5.6 billion in first-quarter sales, below FactSet estimates of $5.89 billion.

Intel said adjusted sales and earnings for the first quarter ended March 27 were $18.6 billion and $1.39 per share, higher than analyst estimates of $17.89 billion and $1.15 per share, according to Refinitiv data.

Intel's non-adjusted results include a $2.18 billion judgment won by VLSI Technology LLC in a patent trial in March. Gelsinger said the company is appealing that verdict and pressing for changes to U.S. patent laws.

(Reporting by Chavi Mehta in Bengaluru; Editing by Arun Koyyur and Diane Craft)