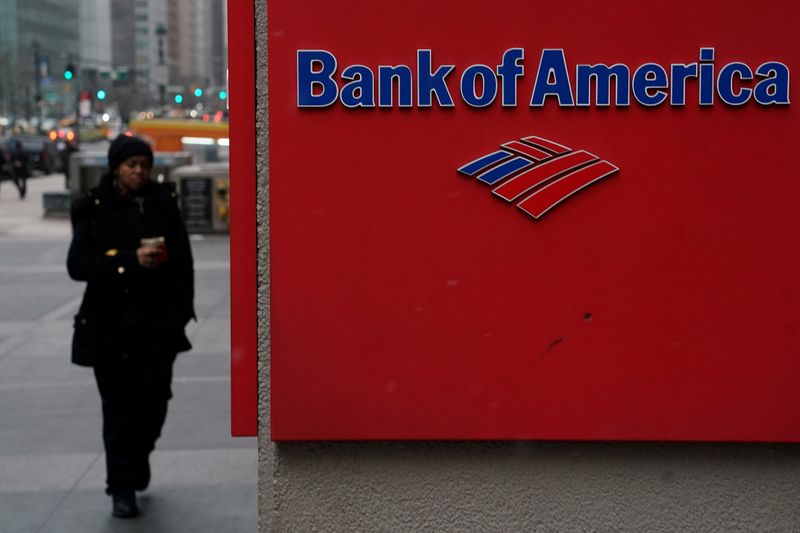 Bank of America's retail customers have put more deposits into the bank, using some extra cash to pay down debts and invest, executives said. These trends have been driven by government stimulus programs that have propped up struggling workers during the pandemic, as well as vaccine rollouts that have allowed businesses to open up again.

Consumer spending is now higher than it was before the pandemic, while individuals' investment accounts at Bank of America are at a record level.

If the recovery continues as expected, with U.S. economic output growing and unemployment declining, Bank of America's profits can flourish in upcoming periods, executives said.

"We see an accelerating recovery," Chief Executive Brian Moynihan said on a call with analysts.

Some of this was already evident in Bank of America's first-quarter results. The second-largest U.S. bank was able to "release" $2.7 billion worth of funds it had set aside for loans that might go bad, because of an improving outlook.

However, low interest rates and declining balances put a dent in the income Bank of America earns from traditional lending during the first quarter. Its results were also muddied by $800 million in unusual expenses for compensation, real estate and taxes.

Excluding reserve releases and one-off costs, the figure was more like 67 cents for the most recent period, according to Oppenheimer analyst Chris Kotowski.

Analysts had been expecting 66 cents per share, on average, according to Refinitiv.

Bank of America shares were down 3.4% in afternoon trading.

In addition to results, Bank of America announced a $25-billion share repurchase program â its first since the Federal Reserve lifted limits set last year on buybacks and dividends.

Consumer banking, Bank of America's largest business, posted a 49% profit increase because of reserve releases, but revenue fell because of lower interest rates and loan balances.

Its global banking unit, which caters to institutions rather than individuals, benefited from higher investment banking fees. But it also reported odd charges and benefits that made its results murky.

Analysts focused on the outlook more than the first-quarter flub, saying Bank of America is poised for growth in future periods.

Internal calculations about loan demand and interest rates suggest Bank of America could fetch an additional $1 billion in net interest income through the end of the year, Donofrio said. That metric shows the difference between what banks pay for borrowing and earn from lending.